“The ballot is stronger than the bullet.” Abraham Lincoln

In 2020, millions of Americans will turn up at polling locations to act upon their right to vote for the next president. Debates will be held, campaigns will be enacted, and meetings upon meetings will occur, and all of this will happen to decide who will lead our beloved country in 2020.

This is the latest news, summed up for you, because we believe that the truth must be uncovered from the depths of the misinformation spread around so often.

Our Summary of the Democrats:

To qualify for the third debate that took place in Texas, candidates had to have at least 2% of Democrats supporting you, which caused the governor of Washington, Jay Inslee, to drop out of the race. Candidates were also required to have donations from at least 130,000 unique donors and at least 400 different donors from 20 different states. 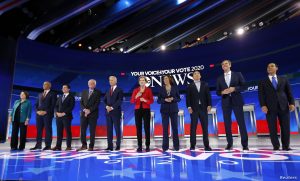 For the upcoming Los Angeles debate held on December 19th, candidates need to show that they received contributions from 200,000 unique voters, and received donations from at least 800 unique donors from 20 states. Candidates also need to have polled 4% support in four polls or have polled 6% in two polls from Iowa, New Hampshire, South Carolina, or Nevada. Any polls submitted must be approved by the Democratic National Committee. So far, the following candidates have qualified: Joe Biden, Pete Buttigieg, Amy Klobuchar, Bernie Sanders, Tom Steyer, Elizabeth Warren, and Andrew Yang.

Our Summary of the Republicans:

The most popular Republican candidate at this time is Donald J. Trump, the current president. However, Trump is facing a popularity crisis, as his actions in office have caused significant skepticism among even non-Democratic critics.

As of December 2019, President Trump has two republican challengers for the office – Bill Weld and Joe Walsh. Bill Weld was formerly a two term governor of Massachusetts and considered one of the most fiscally conservative governors. Joe Walsh was formerly a U.S. representative from Illinois elected in 2010 during the Tea Party wave.

Quotes found on the campaign websites of Weld and Walsh show a lot about their motivations for running against an incumbent president. Bill Weld’s website states, “One man is standing up for a better America. The anger, division, and political gridlock have to stop. Bill Weld believes America deserves better.” Joe Walsh’s website states, “This is more than a fight for the presidency. It’s a fight for the heart and soul of our nation.”

Whether or not President Trump will have to debate one of these candidates or face them on the actual state ballots is still to be determined.

Sadly, only about 60% of eligible voters actually voted in the 2016 election, and even less voted in the 2012 election. These statistics are very disappointing. Voting is one of your civic duties, just like obeying the laws and jury duty.

Why do we have the right to vote if we never use it? You can help your country step in what you think is the right direction in each and every election. Most of our seniors are able to vote, so we’re encouraging them to do so. If you think about what your vote could do, is it really that much work? All you do is check off a few boxes.

As Thomas Payne says, “The duty of a true patriot is to protect his country from his government.”