At the 2019 U.S. Open held in New York City,  many amazing matches were played and thousands of eager fans cheered players on vigorously. In the end, the winners were Bianca Andreescu and Rafael Nadal. Nadal has won 19 Grand Slams now, only one behind Roger Federer. The U.S. Open was Bianca Andreescu’s first Grand Slam win.

On September 8th, Rafael Nadal took on Daniil Medvedev in an epic showdown of skills. Nadal, the second seeded player in the tournament, is a tennis icon. Medvedev, the fifth seed, is a rising star. In the first semi final match, Medvedev took down Grigor Dimitrov without trouble. During Nadal’s semi final, he ousted the thirteenth world ranked player, Matteo Berrettini.

In the finals, Nadal won the first set with a late break. Nadal worked hard to take the second set as well. After that, something clicked inside of Medvedev’s head, and he just took off. Medvedev rallied hard to take both the third and fourth sets and tie Nadal’s score. In the fifth set, Nadal broke late in the set, resulting in a win. Nadal is now only one Grand Slam title behind Roger Federer’s record of 20. 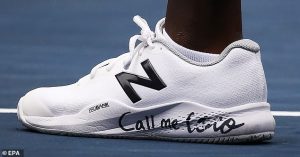 The third-round match between Coco Gauff and Naomi Osaka was particularly emotional. Walking onto the court, Coco Gauff wore her new and clean white sneakers which displayed the words – “Call me Coco”.  Coco played a hard match, and was devastated at her loss. The score was 6-3, 6-0. Coco held in her tears while walking up to the net to shake hands with Osaka. Finally, her tears came streaming down her face. Naomi Osaka then showed some real sportsmanship. Naomi went over to Coco, and invited her to join the on-court interview.  Now, what is Coco going to do next in her career?

Serena Williams, 37 years old, played Bianca Andreescu in the U. S. Open finals. Bianca Andreescu, a 19 year old Canadian, had won against Serena in the finals of the Roger’s Cup. Serena had to retire at the end of the fourth game due to a back spasm. Bianca Andreescu and Serena Williams played a hard core match and battled it out. Serena had many comebacks throughout the match. They had many long rallies from the back of the baseline. Bianca Andreescu had many astonishing winners, but one in particular was extra special. Serena served and the two had a couple balls that hit the baseline, but then Andreescu hit a dropshot in the left front part of the service line. Andreescu then blocked a volley right to Serena, and Serena hit an overhead to the baseline. In the match, there was always something going on. They always kept the viewer on their toes.

In conclusion, the U.S. Open was a very exciting and entertaining tournament. There was always a match to watch. Now, reporters at the MidKnight Times are looking forward to watching the Dubai Open in February 2020.