In 2016, Hillary Clinton had almost three million more votes than Donald Trump, but Trump still won the election. This is because of a system called the Electoral College. Each state has a set number of electoral votes. If a candidate wins a state, they get that state’s electoral votes. 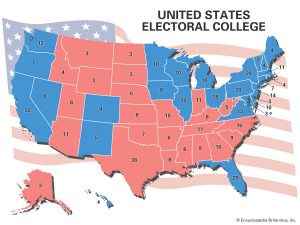 This system is only in use during a general election. Each state has a different number of electors. That is determined by the state’s number of U.S. senators (each state has two) plus the state’s number of U.S. representatives (varies between states) in the house. If a candidate wins a state, they get that state’s electoral votes. So really winning the presidency is not all about who gets more votes, it is about who gets more votes in the right places.