This heart-warming, funny, and awesome movie is a classic of the music genre. It is perfect for a family movie night, and will entertain both adults and kids alike. 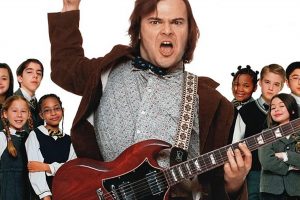 When Dewey Finn is kicked out of his rock band right before a big event called “Battle of the Bands” he resolves that he will form another band, and that they will win the prize. Dewey is then informed by his roommate and friend Ned Schneebly that he is overdue for his share of the rent. While Ned is at work, Dewey intercepts a phone call from Horace Green, asking Ned to come in and substitute at the school. After Dewey hears the amount that Ned will be paid, which is more than enough to cover his portion of the rent, Dewey pretends to be Ned, in order to get the money to pay his rent. Arriving at Horace Green, Dewey Realizes that he has no idea how to teach, and instead lets the kids have recess for the entire day. When he overhears the kids in music class, he then comes up with a plan to use them for his band and win “Battle of the Bands”

Lots of rock, some good laughs, a healthy dose of absurdness but enough reality to ground it and bring you into the story.