The Pace Academy Middle School seems to be in support of the new sandwich. Mr. Mark Sommerville, Assistant Head of Middle School for Student Life, ate the sandwich and reported that he enjoyed it. Mac Barnette, eighth grader, told the MidKnight Times, “It’s personally my favorite item on the whole menu.”

When Michael Madison was interviewed, a sixth grader who is passionate about chicken sandwiches, he exclaimed, “Oh my gosh – I love it so much, and how crispy the chicken is.” 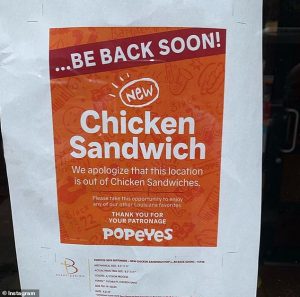 The Popeyes chicken sandwich sold out after two weeks and has made $65 million for the company, accounting for 30% of the restaurants profits and doubled store traffic. Estimates are that around 1,000 sandwiches were being sold daily around the country before stores had to post a notice indicating there was no more sandwiches at their location. Gayle King, the CBS morning news anchor, posted that she had to travel to 15 different Popeyes stores to find a store that wasn’t sold out.

The Popeyes chicken sandwich officially sold out across the country on August 28, 2019.  The company in a statement reported that they are working to get the item back on the menu as soon as possible, however, this time as a regular menu item instead of a limited-time offer. The verdict is still to be determined as to who is the winner of the Great Chicken Sandwich War!