Winter Sports Off to a Strong Start

Even though the season looks a little different, all four winter sports are off to a strong start. All teams have adopted different COVID-19 protocols and are trying to stay as safe as possible, while also maintaining a level of high performance.

This year’s wrestling team has high hopes for the season. “I think one goal is to make it to the state tournament, which is something we haven’t done in quite a while,” said head coach Grady Stevens. “We have a really strong group of juniors and a good group of freshmen that are coming in, so we feel really hopeful about being able to go to state as a team.” This year, the team is composed of only juniors, sophomores and freshmen.

“The juniors have to step up and we really have good excitement and energy that carries into practice and meets,” said junior Henry Leusink. “As a team mostly of juniors, we have been improving since freshman year, so a trip to state would be awesome.” The team is not only working hard to build a state team, but also to build team camaraderie. “My favorite thing about the team is the bonds that I have formed with everyone,” said sophomore William Cummings. “There is not a single person on the team that I would consider anything less than a great friend of mine.”

Along with getting tested weekly, the wrestling team has put additional protocols into place to protect the team. “In practice, during conditioning and the weight room, we have to wear masks,” said Leusink. “This makes it much more difficult to breathe, but hopefully it’ll help with endurance and makes things easier when we take them off in the meets.”

The team has been split into pods of three wrestlers in the same weight class. “We’re separating those pods into different corners of the room,” said Coach Stevens. “This is challenging because instead of being able to wrestle four, or five, six guys, in practice, you’re really stuck in your group of two or three guys.” The team is trying to get comfortable with all of the new changes. “You might want to drill a move one day, and then all of a sudden, people are getting closer than six feet, and it’s like, alright, we got to back up,” said Coach Stevens. “Building normalcy into those protocols has been tricky, but we’re there.”

The team has some exciting meets coming up. “The Buckhead belt is always a great one for us,” said Coach Stevens. “It is Westminster, Holy Innocents’, Lovett and us, and so it’s just seeing who’s the best in the area.”

Coming off a state title last year, the boys basketball team is as determined as ever to have a successful year. “We definitely want to try to duplicate what we did last year, but we also want to try to be a team that’s nationally recognized, and hopefully get a chance to play in the national tournament,” said head coach Sharman White. “Along with trying to win as many games as possible, we’ve kind of advanced our goals just because of that.” Senior captain Madison Durr echoed this enthusiasm. “My goals are to win not only another state championship, but get a bid to the Geico Nationals and win the high school national championship,” said Durr.

The team has a highly competitive schedule that they hope to use to gain national attention and prepare them for the end of season tournaments. “We are looking forward to every game, but there are quite a few events that’ll be testing us in various ways competition-wise,” said Coach White. “Those include the Under Radar, where we will play Sandy Crew, who features the No. 1 player in the state, and also our own event that we have here called Playing for Change from Dec. 19-22, which will feature probably eight of the top teams in Georgia overall.” The team will also visit Arizona and Ohio to play other nationally ranked teams.

Like the other winter sports, basketball players are tested for COVID-19 every week. The team is also required to wear masks during practice and on the bench. Unlike all of the JV and middle school teams, the girls and boys varsity basketball teams are not required to wear a mask while on the court during a game. “We’re trying to do everything in our power, because this is a kind of invisible type of opponent, so we don’t know what it looks like, but we have to try to do everything we can,” said Coach White. “Staying safe is not always the easiest, but the team is working hard to adapt.”

“I would say us not having to wear masks in the game made it a lot easier to adjust to, but wearing them in practice is definitely weird,” said junior Matthew Aronson. “We are adjusting better than most, I feel,” added Durr. “We have learned to value others over ourselves by not putting ourselves in situations where we could contract the virus and possibly put the season at jeopardy.”

Varsity girls basketball players must also wear a mask at all times except for when playing a game or scrimmage, and get COVID-19 testing every week. “The mask protocol, although necessary, is sometimes difficult to work with especially when running because it makes it harder to breathe and makes you tired faster,” said sophomore Ella Berman. Despite being unable to gather for pasta dinners or team sleepovers, the team is not letting that take a toll on their bond or success during COVID-19.

Junior Sydney Middleton is excited to advance her skills while also getting closer with the girls on the team. “My goals for the season are bonding with my fellow teammates and also improving on my defensive game,” said Middleton. Senior captain Hanna Vincent is also devoted to creating a tight knit team. “I’m looking forward to getting to know the underclassmen this year, as well as my leadership role as a senior,” said Vincent. “We usually have senior night, but this year, I’m just hoping that we get a full season.” Hanna is also hoping for a region championship victory.

Head coach Troy Baker has many goals for the team this year. “My goal is for each player to surrender to the concept of being a great teammate, and for all of us – coaches included – to grow as people throughout this process,” he said. Dr. Baker wants the team to get better every day and self-actualize in order to be the epitome of a team. “I’m looking forward to spending time together as a family and to building lifelong relationships,” said Dr. Baker. “It sounds cliché, but it’s really the cornerstone of our program.”

Dr. Baker also had two main points he wanted to voice to the team. “You show up, you do the work and you compete,” said Dr. Baker. “I’d also like to give a shout out to Hanna Vincent, who has been in this program for four years,” he said. “She has been a great teammate and tremendous source of positive energy.” 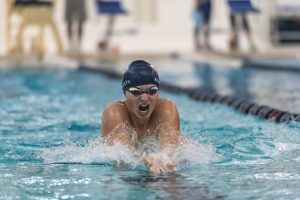 As the Pace swim team’s season begins, head coach John Ague is simply happy the team is able to meet in person. “It all starts with wearing masks, social distancing, washing hands.” said Coach Ague. “The entire school has protocols the administration and board have approved, and I am comfortable with what we have put together for our facility.” Protocols include wearing masks until arriving at the diving blocks to get in the water and having swimmers use every other lane to ensure social distancing is followed.

While protocols are in place, many members of the team feel as though not enough is being done. “Pretty much, the swim team does not feel like much has changed, which has caused a lot of controversy and many key swimmers have even decided not to swim because they do not feel safe,” said junior Leah Favero. The majority of the swimmers from the senior class were apart of the group who felt uncomfortable with the current protocols. After a discussion with Head Athletic Director Chad Wabrek, the athletic department has promised to implement some changes to make these swimmers feel more comfortable.

Even with challenges surrounding COVID-19, the team, led by excellent senior leadership from Isabel Battista, Anthony Salazar, Rivers Graham and Lily Koch, is excited to get the season underway. “I look forward to spending time with my teammates,” said sophomore Marisa Sapre. “Even though there isn’t as much team bonding as last year because we can’t go out to eat together after meets and practices due to COVID-19, the team dynamic is still going strong.”

Along with the common goal of faster individual times and team victories, many swimmers have individual goals. “This season I am looking forward to seeing everyone get faster and being able to race and have meets despite COVID-19,” said sophomore Carter Freudenstein. “My personal goal is lowering my 100 breast time and getting a state cut time for our medley relay,” said Favero. Favero also gave a shout out to one of the standout swimmers on the team. “Everyone should look for Lane Canova,” said Favero. “He is one of the only freshmen on an A relay.” Following her commitment to dive at the Division One level at the University of Virginia, Lizzy Kaye is slated to have another stellar year as well.