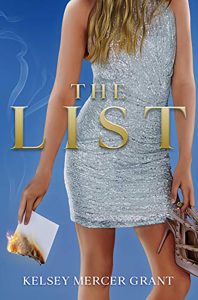 “The List” was published in July of 2020 by a group of Pace moms. Photo: Amazon

“Imagine Prom on steroids. The exclusive, high society Sadie dance breeds drama. In an attempt to control the catfights and rejections, a list is created where girls can claim dates before the extravagant proposals.”

Sound familiar? That’s just the beginning of the Amazon blurb for a new novel released in July 2020 entitled “The List.” Pace moms of the Class of 2022, under the pen name Kelsey Mercer Grant, wrote and published the novel that is closely based on the real-life events of the infamous freshman PDC dance. The novel follows a high school freshman, Kelsey, described as “a shy bombshell” as she “finds herself and the confidence to show everyone who she truly is.” Hopefully, you are already sensing the overdone cheesiness of this novel.

Kelsey attends a Southern private high school, very much like Pace, where on the first day of school, girls claim their dates for the Sadie dance in the spring. Leading to a great deal of drama, the list is meant to replicate the Google Sheets document that many freshman Pace students used in years past to aid in choosing their dates.

In the novel, the list obliterates longtime friendships, creates new romantic relationships, and results in backstabbing revenge plans. As the year progresses, Kelsey finds herself a target of the mean girls, their heinous revenge, and worst of all, their mothers, who incidentally have way too much time on their hands. (Sounds familiar, right?) Like any typical Young Adult novel, by the end of the book, Kelsey, little miss CEO of “I’m not like other girls,” restores her friendships and – big shocker – gets the guy.

As one might imagine, wild rumors swirled around the Class of 2022 with the release of the book. Questions arose like, who wrote the book and who the characters are based on, so I took one for the team and spent my precious time reading each excruciating page of the novel. Let’s just say that I would have rather spent my time doing ACT practice tests while eating a pair of vintage jeans.

The book reads like it was written by a fourth grader – literally. In fourth grade, we were assigned a two-page paper to be written about 15 seconds of our lives, and as one could guess, the papers were jam-packed with excess sensory details that nobody cares about. Now imagine those two pages extended to 400.

Each scene is piled sky-high with adjectives, adverbs and details that only take away from the already cliché plot and painfully awkward dialogue. However, the authors’ confusing writing style actually points to two important aspects of high school: that it makes zero sense and makes you never want to read a book ever again.

It’s almost as if they want the reader to be so confused by the writing and multitude of characters (I counted about 30 distinct ones) that they miss the spelling and grammar mistakes. By my count, there were three typos and grammatical errors, which is quite a bit considering that this article would not even be published if I had made the same mistakes. However, I would like to ask the character Hope how she managed to “crush” (as opposed to crash) her brand new Porsche. Was it with her bare hands? Because that would be quite a feat.

Now, I must give credit where credit is due. Considering the amount of time and effort put into this novel, it should not just be tossed aside. Rather it should be thrown with full force. Into the open mouth of a fire-breathing dragon. And I must say, it takes a lot of bravery and confidence to publish a novel this bad.

The most interesting thing about the novel is the fact that these mothers care so much about the bland drama of their teenage kids that they wrote 400 pages about it. The Class of 2022 is very much over it, so why aren’t they?

In a way, the novel reads like a frivolous attempt to echo the treachery and deceit of the “Gossip Girl” saga. Except instead of the 6’1” hunk of a man Nate Archibald, we get Nick, a 14-year-old JV cross country runner.

Nonetheless, the authors have already begun writing a sequel. Entitled “Prom: Meet the Ex, A Key Man on the Plane,” their second novel sounds absolutely enthralling. Better yet, they intend to turn this riveting story into a major motion picture. I, for one, would love to see it performed by our beloved Pace theatre program.

Would I recommend that you buy this book? No. Instead, you could spend the $16.99 on four Chick-fil-A chicken sandwiches and a large Coke. To sum it up, this is just one of those books that as soon as you put it down, you never want to pick it back up again.