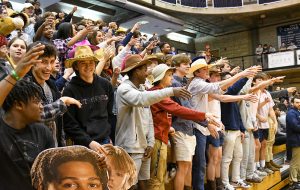 The Pace student body dressed as cowgirls and cowboys as they supported the boys varsity basketball team in the Inman Center in February 2020. The team took the win in the GHSA State Championship Elite Eight against Monroe Area High School. Photo: Fred Assaf

The year 2020 marks 20 years of the Inman Center, a “multipurpose student activity facility,” as stated in Pace Academy’s press release at the time of its opening. Having opened on Jan. 26, 2000, this 97,000 square foot center tripled the athletic and student activity space. The indoor track, 900-seat gymnasium, wrestling and gymnastics training area, locker rooms, cafeteria and office spaces were chiefly responsible for a next level Pace community.

“Prior to the construction of the Inman Center, there was a pool, and behind that, tennis courts,” says Pace alumna and now Director of Communications Caitlin Jones. According to the press release, the Inman Center began with the Educating for Life campaign.

The building was named for the Hugh McDonald Inman Sr. family which gave the first $2 million for its construction. Mr. Inman led a real estate development firm and raised two Pace graduates, Don and John Inman. (Their families also had children who graduated from Pace.) Other Atlanta foundations contributed to the funding of the Inman Center, and the campaign reached 95% participation from the Pace parent body.

A contributing factor in constructing the Inman Center was not only the attention to Pace athletics but also what came with that, including a spirited student body as students watched and supported their classmates. “I think the Inman Center signaled a point where Pace began to take athletics seriously,” said history department chairperson Tim Hornor. “The center created a space in which you could go see a basketball game in impressive surroundings and gave a notable impression to outsiders coming to the school.”

According to Mr. Hornor, the Inman Center was the first domino to fall in establishing a new Pace, which later included the construction of a new middle school and upper school, as well as increased attention to athletics. “We often think of athletics and academics sort of in rivalry with one another, but this new Inman Center created a different vision of what Pace could be,” Mr. Hornor said.

Mrs. Jones claims that the Inman Center not only grew Pace athletics, but that the game experience was taken to a different level of legitimacy, as players felt a newfound support, spirit and pride within the student section.