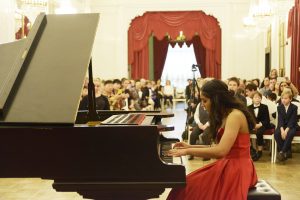 Many of sophomore Ovie Nirgudkar’s peers are likely unaware of her advanced ability to play piano. Nirgudkar, who has played the piano since the age of four, has a passion for the instrument and has received national and even international recognition for her work. But her level of skill comes with a huge investment of time. She works towards further improvement every day. She practices daily for over an hour on weekdays, both before and after school, as well on the weekends by herself and with her teacher. The time commitment is worth it, she says.

Nirgudkar has played in many competitions over the years in places around the world, including Carnegie Hall in New York City in 2015, 2016 and 2017 and Royal Albert Hall in London in 2018. She has also performed at competitions in San Jose, California; Tampa, Florida; Denver, Colorado and St. Petersburg, Russia among other places. “My favorite was Russia because I got to connect with people despite our language barrier,” she said. “We used a translator to understand each other.”

“I have to say that every day is not easy, and practicing is boring,” said Nigudkar. “But the important thing to remember is that it all pays off, and it’s worth it when you can perform on the big stages in front of tons of people.” She added that it is definitely not always fun with the difficulty of her competitions, but she has done it enough times to know that it pays off in the end. Nirgudkar said that her favorite type of music is from the Romantic period in music, from around 1830 to 1900. Her favorite composer is Chopin, whose work she has played many times.

Her favorite part of playing piano is getting to perform on stage. “When I was little I played because it was fun, but eventually when you start competitions you want to keep winning,” Nirgudkar said. “I put a lot of pressure on myself, but my teachers and parents do support me a lot. You have to be competitive to be able to practice all the time and win anything, but I enjoy the pressure.”

Nirgudkar also recommended piano as an instrument for others to try out for themselves. “I’d say if you’re a parent with a little kid and you want them to know an instrument, start with the piano because it’s the easiest starting point.” She added that it’s harder for young children to play the violin, for example, and that the piano on a basic level is a natural starting point. “Not everyone has to take it as seriously as I do… everyone who enjoys it should play for sure,” she said.