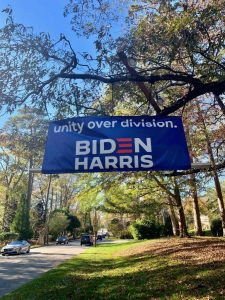 Just down the street from Pace hangs a banner promoting “unity over division” and an end to the extreme political polarization in America. Photo: Ashley Myers

President-elect Joe Biden hopes to ease tensions and return to a bipartisan atmosphere as soon as possible. “The refusal of Democrats and Republicans to cooperate with one another — it’s not some mysterious force beyond our control,” said Biden. “It’s a decision, a choice we make. If we can decide not to cooperate, then we can decide to cooperate. And I believe that this is part of the mandate given to us from the American people. They want us to cooperate in their interests, and that’s the choice I’ll make. And I’ll call on Congress, Democrats and Republicans alike, to make that choice with me.”

Most Biden and Trump supporters agree with Biden’s sentiment and call for cooperation. According to the Pew Research Center, “in October, 89% of Biden supporters and 86% of Trump supporters said their preferred candidate should focus on addressing the needs of all Americans, even if it means disappointing some supporters. Only around one-in-10 in both camps said their candidate should focus on the concerns of those who voted for him without worrying too much about the concerns of those who didn’t.”

Advocates for decreasing political polarization in America point to the media and the spread of misinformation as a main dividing factor between parties. Andrew Hanauer, opinion editor at USA Today, explained that often the media “distills entire groups to stereotypes, caricatures and villains, erasing the humanity and complexity of its individual members” because content that is virally shared and reported on is often just the “worst behavior” of a “tiny minority of Americans.”

Nina Jankowicz, a Wilson Center disinformation fellow, encouraged everyone to “be skeptical of social media” and especially “beware of algorithmic bias.” On a large majority of social media sites, algorithms are used to predict content that the user would interact and engage with the most. Therefore, once the algorithm identifies the user as holding a specific political view, the program will continually show that person content that goes hand in hand with their pre-existing beliefs.

The existence of algorithms allows disinformation to spread rapidly across social media platforms and the internet. “Our democracy depends upon truth,” said Jankowicz, after explaining that politicians should take pledges against the use of disinformation in their campaigns and daily work.

Republican Theodore Roosevelt once said, “Neither our national nor our local civic life can be what it should be unless it is marked by the fellow-feeling, the mutual kindness, the mutual respect, the sense of common duties and common interests, which arise when men take the trouble to understand one another.”

Jankowicz echoed this sentiment when she said that people need to have “real, in person, conversations” with one another. She went on to explain that commenting on social media can cause more tension whereas taking the time to meet up and have a conversation is more likely to lead to genuine understanding of the other person’s point of view.