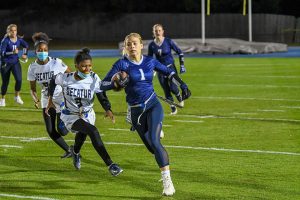 Senior Lizzy Kaye zooms past a Decatur High School defender who is trying to pull her flag during their Nov. 4 double header. Photo: Fred Assaf

For the first time this year Pace Academy has put together a girls flag football team. They recently completed the regular season going undefeated (9-0).

In the regular season, they were able to defeat everyone in their region which included many strong schools: Decatur, Lakeside, McNair and Dunwoody. This earned them the region championship and the one seed headed into the playoffs. The team’s success is impressive, given that none of the players have ever competed in this sport. Although the team is new, the Knights showed no signs of inexperience, dominating their first three games against Lakeside and McNair by a margin of 89 points altogether.

Even so, the team had a lot to work on. “We have improved our skills and we’ve gained valuable knowledge of the game,” said sophomore Ovie Nirgudkar “We have all become better athletes and teammates, and I’m excited to see what the future holds for us.” She said that the double header on Nov. 4 against Decatur was particularly tough due to the Bulldogs’ physicality and speed.

Nirgudkar noted that despite the strong skills of the Decatur team, “the energy and spirit coming from our team at that moment propelled us forward and ultimately landed us with victories in both games against Decatur.” The final scores of the two games were 13-6 and 19-0. “I think that as a new team, we have really come together and learned each other’s strengths and weaknesses, now knowing that we have each other’s support” said senior Lizzy Kaye.

The team is comprised of girls from all grades, and there is no junior varsity team. The girls had a impressive turnout for their first year with a roster of 16 people. The team is well balanced in terms of grade, with at least three players in every grade. This is important for continuity for the years to come. The players are led by overall team captain and senior Jamie Kornheiser who plays all over the field for the Knights, on offense, defense and special teams.

Filling the other leadership roles for the Knights are senior Sydney Silverstein and junior Madison Auchincloss as captains for the offense and defense, respectively. Silverstein is the quarterback, so she has to be a vocal leader for the Knights at the helm of the offense. Auchincloss plays defensive back and is in charge of organizing the secondary, making sure everyone is fulfilling their roles.

The team has been putting in hard work all fall in order to achieve their success. Their schedule consists of practice four days per week as well as film sessions. Even though these practices prepare the girls for the games, the team attributes much of their success to the high energy each player brings and the strong bonds they have created. “The most fun part of the game is the contagious energy among the team,” said Nirgudkar. “We have really become a family even though we haven’t been playing together for very long.”

The games are played on a 40×80 yard field instead of a 50×100 yard field, which is standard for GHSA high school football. Each team has seven players on the field at a time. Because there are no pads, the girls are supposed to limit the physicality, but both the coaches and players note that many games have become rough, with the Knights sustaining multiple injuries. Fortunately for the Knights, these injuries will not take any of their players out for the upcoming playoffs. The rules for blocking stipulate that players keep their hands down and use their bodies to block defenders for team mates.

One of the biggest differences between tackle football and flag football is the fact that the first down marker is placed 20 yards downfield rather than 10 yards. There are no field goals, so if a team does not make the first down there are two options: going for it on fourth down or punting. Because there is no kicking, punts are actually passes. After a touchdown, the officials give the team two options: going for one or two points. If the team elects to go for one, the ball is placed on the three yard line and if they go for two, it is placed on the ten.

This season would not be possible without Head Coach Ty Johnson. She has been playing flag football for the WFFN USA Team and WFFN National Team for many years and loves the game of football. She spends countless hours in the summer and fall with the Pace boys varsity football team as one of their strength and conditioning coaches.

Coach Johnson wanted to give Pace’s female athletes the opportunity to play football, as she has spent many years promoting females’ role in the sport. “I have always wanted to be part of creating an opportunity for young women athletes to play football,” she said. “When GHSA, Fred Assaf and Pace Academy presented this opportunity, it was a dream come true… I seriously could not ask for a better group of talented athletes to have on this inaugural team. It’s been full of excitement, teachable moments, and bonding experiences that have been more than I have ever imagined.”

“This team has a great head coach, Ty Johnson, and her passion for the sport is infectious,” said Kaye. “It’s easy to want to do our best to make her and the rest of the coaches proud.” Nirgudkar agreed, saying that Coach Ty was their ‘biggest supporter.” “I’m beyond grateful to have her as a coach and mentor,” said Nirgudkar.

As many know, on Sept. 25 sophomore Jordan Sloan suffered a traumatic brain injury during Pace’s game against Westminster. Sloan and his family have been at the center of Pace’s community ever since. The flag football team dedicated their season to Sloan with aspirations to win the state championship for him, carrying a #StayStrongSloan flag onto the field before every game.

“Our ultimate goal is to win that state championship for Jordan Sloan, for these amazing athletes who are making history every time they step on the field, and for those in the Pace community who have supported us since the very beginning,” said Coach Johnson. “I am absolutely elated for this dream to finally become a reality, not only for myself, but for all of the young athletes that have wanted an opportunity to play football and just never had it. It is finally here. It seems as though all the years of playing and promoting women in football have finally paid off.”