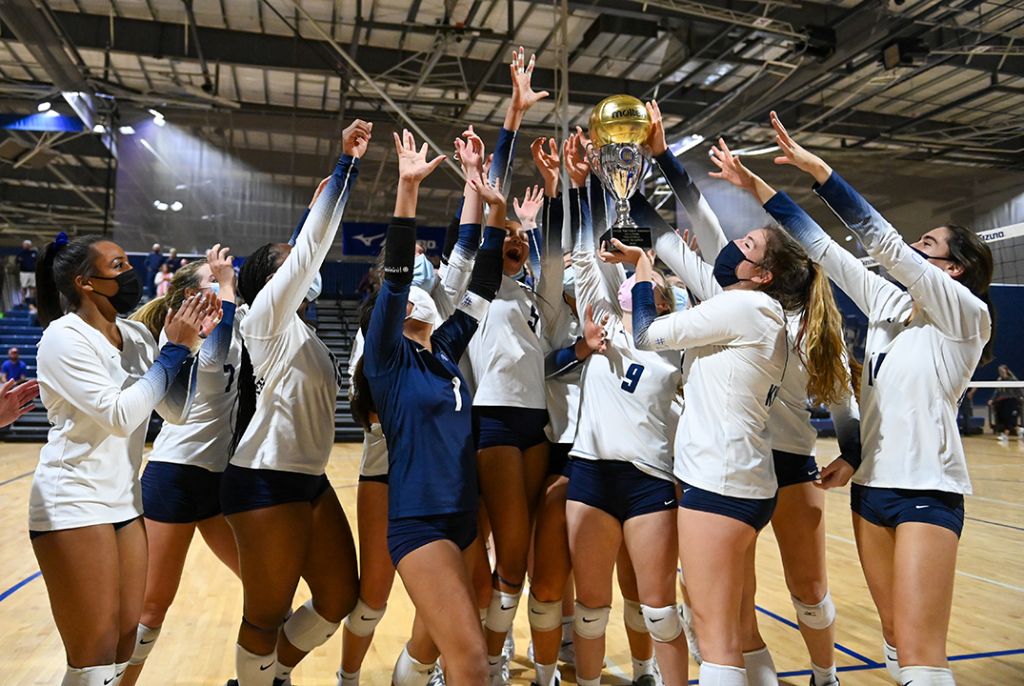 The varsity girls volleyball team defeated Gordon Lee High School 3-2 on Nov. 7 to capture their fourth consecutive state title in the championship match at Lakepoint Sports Complex in Cartersville. The girls took a strong lead early in the match, winning both the first and second sets 25-18. The following two sets were close, but Gordon Lee managed to win both, beating the Knights 25-18 and 25-23. The Knights clinched the win in the final set of the match with a score of 15-8. “Going into the last set, I think my energy was divided between being more nervous than at the start of the game and being the most determined and excited I’d ever been,” said senior team captain Elliot Mathis.

The team entered the playoffs on Oct. 21 seeded first as GHSA AA Area 5 champions. The Knights breezed through the playoffs, defeating Banks County, Dade County, Vidalia High School and Union County in the lead up to the state championship. In each case, Pace made quick work of their opponents, winning all four matchups 3-0.

Shortly after the playoffs, GHSA named Head Coach Anna Bush the Class A/AA 2020 Coach of the Year, freshman Grace Agolli Class A/AA Player of the Year and freshman Ellie Siskin Class A/AA All-State team. “To win four championships in a row is an unbelievable feeling, of course,” said Coach Bush. “I know everyone on the outside sees it this way, but every team and every year is a different journey. This year was no exception.” This year, ten players were new to the young team, made up of seven freshmen, two sophomores, four juniors and two seniors – Hannah Pace and Mathis.

Agolli is following in the stride of her older sister, Ada Jane Agolli ’19, who currently plays volleyball at Brown University as a freshman. “It’s a lot of pressure following in her footsteps and filling the role that she left,” said Grace. Siskin, another freshman leader, believed her transition into the high school was smooth and encouraging, especially being a part of the volleyball team. “It was very different, but not scary at all, because the team was so welcoming,” she said.

The most significant change this year for Pace athletics has been the implementation of protocols to protect against the COVID-19 pandemic. The volleyball players wore masks throughout their season and fan attendance at matches was limited. Junior Julia Holmes, who won her first championship this year, enjoyed playing this season, but believed the masks were a difficult obstacle to overcome. She said that “wearing the mask was frustrating at times because there were certain teams that didn’t care about the rules at all. But in the end, it didn’t matter because we beat all of them anyway.”

Sophomore Brooke Brumfield embraced the masks and found them to further motivate the team. “It felt accelerating because we have worked so hard all season while playing in a mask, and beating another team that refused to wear masks made the victory even more worth it because we were being safe not only for ourselves, but also for our family and friends,” she said.

The Knights ended their regular season 17-7, defeating Lovett (twice), North Atlanta and Woodward on their way to the playoffs.

Knights fans were not able to storm the court at the state championship match this year like they have for the past three years, but the crowd was energetic, clapping and cheering on the team through every point. “The [players] deserve all the credit for their selflessness, focus and work ethic,” said Coach Bush. They came together and played as a unit which, in my mind, made the sum better than the parts.”