The Country Reacts to 2020 Election Projection 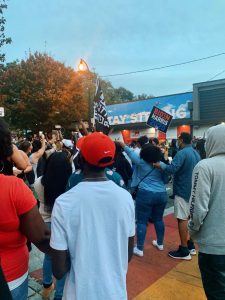 Late Saturday morning, cities across the country erupted in celebration as major news outlets declared Joe Biden the projected winner of the 2020 Presidential Election. Many people took to the streets to dance, cheer and bang on pots and pans, congratulating their neighbors and basking in the light of a new era ahead.

CNN anchor Van Jones captured the emotions of many Americans when he wept on live TV, explaining that “this [election result] is vindication for a lot of people who really have suffered” and that the quote “I can’t breathe” was “not just George Floyd,” but instead there “were a lot of people who felt like they couldn’t breathe.”

In Atlanta, people lined the streets surrounding Piedmont Park. The epicenter of the celebration was located at the intersection of 10th St. and Piedmont Ave., a memorable location due to the crosswalks painted with rainbow stripes. Police cars blocked off all traffic from entering the intersection, granting the celebrators ample room to cheer and dance.

People waved a variety of flags such as ones that read Black Lives Matter and Love is Love. Some revelers came by car, playing classic American songs over their car speakers. Others, who lived close enough to see the parade from their houses, sat on their front porches or cheered out of their windows.

Similar scenes could be seen in other major cities such as Washington, D.C. and New York City. Right outside of the White House, people carried signs reading “YOU’RE FIRED,” using Donald Trump’s own catchphrase from his TV show “The Apprentice” against him.

Similarly, once desolate and pandemic-stricken New York City streets were resurrected with joy. Thousands crowded Times Square chanting “USA! USA!”. On a large screen at 44th St. and Broadway, Biden’s speech was met with raucous applause, especially when he promised to create a COVID-19 task force. Strangers, each with their own unique experience and identity, were brought together through this shared feeling of relief and exultation.

Not everyone felt this euphoric release though – a different side of America could be seen on Long Island and in many battleground states such as Michigan and Arizona. Protestors demanded recounts in many states and held signs with slogans such as “Stop the Steal,” referring to Trump’s claim that Democrats tried to “steal” the election. Decked out in Make America Great Again gear, these protestors defended Trump’s claim that the election is not over yet.

Former President George W. Bush congratulated Biden on his victory and then addressed Trump’s claims regarding the integrity of the election. “President Trump has the right to request recounts and pursue legal challenges, and any unresolved issues will be properly adjudicated,” wrote Bush. “The American people can have confidence that this election was fundamentally fair, its integrity will be upheld, and its outcome is clear.”

Not all Republican politicians agreed with Trump’s calls for recounts and lawsuits in multiple states. “I’m convinced that once all remedies have been exhausted, if those are exhausted in a way that’s not favorable to him, he will accept the inevitable,” said Senator Mitt Romney. “But don’t expect him to go quietly in the night. That’s not how he operates. I would prefer to see a more graceful departure but that’s just not in the nature of the man.”

Maryland Governor Larry Hogan agreed with Senator Romney, stating that “it’s time to get behind the winner of the race.” He elaborated on his point explaining that he doesn’t “think we’re going to see anything that’s going to overturn this election” and that he has not witnessed evidence of widespread voter fraud.

Top photo: Revelers celebrate in Midtown Atlanta on Saturday after the announcement on all major media outlets that Joe Biden was the projected winner of the 2020 presidential election. Photo: Ashley Myers