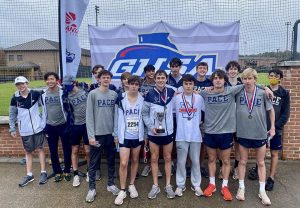 Fresh off double GHSA 2A region championship wins, the girls and boys cross country teams traveled to Carrollton High School on Saturday, Nov. 7 in hopes of reaching their final goal of the season: to win the state championships. After both the boys and girls teams placed second last year in the 3A state championships, tensions were heightened as the runners vied to clench the first place titles.

Preparation for the boys started back in late May with a summer training program. Advancing to the state meet has always been the team’s primary goal; this season was no different. “With a few meets under our belt this year, it was clear Pace was the team to beat in AA,” said boys cross country coach Steve Cunningham. “The week going into state the team was singularly focused on winning a state title. All the hard work was done, the only thing left was to go out and put an exclamation point on what has been the most accomplished regular season the boys program has ever experienced.”

A gloomy day, with forecasts predicting rain, set the scene last Saturday when the cross country teams took their marks in Carrollton. However, even a torrential downpour didn’t stop the boys team when their race began. Ultimately, Edward Blaha was the driving force for the Pace boys, beating the second place Lovett runner by a margin of 10.73 seconds and placing first among the 209 runners, making him a state champion and the best male runner in Georgia’s Class 2A.

The team continued strong with junior Grant Thompson finishing in fourth place. A powerful duo of junior Robert Mallis and senior Robert Houser placed in 10th and 11th, respectively. Junior George Blaha struggled late in the race due to an electrolyte issue and an abdominal strain. However, he persevered, rounding out the top five in 15th place.

“Amazingly, George was able to cross the finish line when most runners would have dropped out of the race altogether,” said Coach Steve Cunningham. “Hats off to him for his amazing mental toughness dealing with the physical problems.” Freshman Jackson Hurd and senior Sam Webb did what they had to do for the team and completed the race in 20th and 21st places, respectively.

But a strong showing for the boys would not be enough to outpace Lovett as they fell short by two points. “Going into the meet, we knew that we were the best team in the state,” said Houser. “We spent all season mentally and physically preparing for the state course to ensure that we would walk away with the state title. Everyone raced up to their full potential, and all set a course personal record. It was a devastating loss, but I am so proud of what this team has accomplished, and I know they will impress everyone next year.”

According to Coach Steve Cunningham, Edward Blaha had the most consistent and accomplished season of any runner he has ever coached. He was even picked as the favorite to win state back in August by GA Milesplit. “It felt amazing to individually win a state championship in the moment, but this feeling was tainted when I realized that we fell short of winning the team title by two points,” said Edward Blaha. “Still, it was something I had been focused on doing all season, and I was thrilled to execute my goal.”

This year, after losing two potent teammates, Payton Payne ‘20 and Paula Sandoval ‘20, the girls worked harder than ever. The girls cross country team also began training long before the state meet, with their goal always being a win on Nov. 7. “This group of girls bonded as a team early on in the season,” said girls cross country coach Jolie Cunningham. “It was fun watching them come together as a team and to see them starting to realize a state championship was a definite possibility for them. Especially coming off a first place victory at region, the girls felt great about the state meet.”

“When our number six runner, Wells Howe, crossed the finish line ahead of Lovett’s number three runner we knew the girls would be ring shopping back on campus,” said Coach Jolie Cunningham. The girls succeeding in winning the state championship for the first time since 2013.

“All we could talk about the entire season was how crazy it would be to win state and get rings,” said Hood. “When we did win, it became clear that all of our training and what we had worked so hard for the entire season had paid off.”

Special props go to Arenth, who took the reins as the number one runner throughout the girl’s season, even breaking the 19:00 minute barrier twice. “The future looks bright for this group of girls,” said Coach Jolie Cunningham. “We graduate two amazing seniors that were outstanding leaders this season out of the top five, but the group they leave behind is ready to step up to the starting line.”