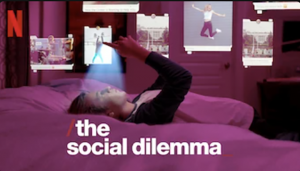 The Netflix original film “The Social Dilemma” follows the character pictured above as he navigates the challenges that social media presents. Photo: Netflix

Netflix released its original film titled “The Social Dilemma” on Jan. 20. Throughout the documentary, former social media developers and technology experts are asked to identify problems created by social media and the root of these problems. The interviews are interspersed with short scenes of a young male character that portray the dangers of social media brought up by the interviewees. Below are five major points that the movie lays out.

1. “If you are not paying for the product, you are the product.” The only two markets that label their participants as “users” are the drug and social media industries. Similar to how drugs only benefit the seller, social media apps also create platforms for, really, the advertisers. Social media targets the vulnerable aspects of human psychology like how the drug market profits off the buyers’ addiction. These social media companies perform small experiments called growth hacking. Algorithms are constantly changing to maximize the amount of money and data they can get from each user. The users rarely notice each tiny change in the algorithm, as it is changing the way we think or interact with the internet. These experiments use humans as pawns to figure out how they can most successfully benefit the advertisers.

2. Along with the experiments in growth hacking, social media apps are also watching everything their users do. This idea of surveillance capitalism uses the data it collects from how long a user looks at a post, to the time of day a user is active, to create models that can predict users’ actions. In short, your social media apps are analyzing you to maximize your engagement and viewing of the advertisements on your feed.

3. While you may feel like you have the strength to limit your time on social media or not be influenced by opinions you see online, in reality, you don’t. That being said, there are some things that you can do to consciously limit your social media use and the data that the apps collect. Some of these tactics include turning off your notifications, leaving your phone in another room at night and choosing the posts you look at rather than viewing computer-recommended posts.

4. In our current environment, fake news is a frequent topic and a pressing issue. Fake news travels up to five times faster than real news. It is important to keep in mind that Google or any other social media platform does not know the truth. The computer is simply recommending posts that an algorithm assumes you would like. An example of this is the Google search bar. If a user types in part of a question, the computer will automatically give you suggested autofill options, which are entirely unique to you and your previous data. This process of recommended information that is not necessarily true plays a key role in the political polarization of our society today. Every party only sees the information they want to see on the internet, not the truth. A way to counteract fake news is to always fact check your information from multiple reliable sources.

5. Since 2011, teen and pre-teen depression rates have skyrocketed. While you may not think it affects you personally, it is impossible to ignore an over 100% rise in depression and suicide rates for pre-teens. While teenagers have had monumental increases in depression and suicide rates as well, Gen Z was the first generation to be introduced to social media in middle school. Exposure to social media in a child’s pre-teen years has been proven numerous times to increase anxiety and decrease students’ willingness to step outside their comfort zone and take risks. The bottom line is that data does not lie; social media is detrimental to the mental health of students during their developmental years.