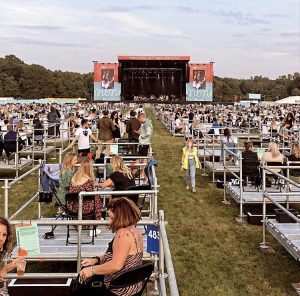 Like every aspect of life in 2020, the music industry has been deeply impacted by COVID-19. As the live concerts and other music events that people had on their calendars were canceled one by one, it became clear that 2020 was not going to be the year that everyone had planned it to be.

The music industry took quite a financial hit with the onset of the pandemic. With the whole world stuck at home sheltering in place, revenues from concerts and the sale of physical albums dropped by millions of dollars, according to Rolling Stone, devastating the industry. Highly anticipated live shows and festivals like Coachella or Atlanta’s own Music Midtown were postponed, as they went against guidelines for social distancing, and fans were left disappointed.

Music artists had to make the best of the circumstances for their careers and their fans, and make the best they did. Bob Dylan released a new album called “Rough and Rowdy Ways” in June. Taylor Swift released a surprise album in July, a quarantine project called “Folklore” she would not have otherwise created without the spare time. Recording sessions for this album were done virtually in order to maintain social distancing.

“Most of the things I had planned this summer didn’t end up happening, but there is something I hadn’t planned that DID happen,” Swift wrote on Instagram in reference to her surprise eighth studio album.

Country singer Jason Isbell had an album set to release during this time and adjusted his plan by releasing his album directly to small businesses a week before the actual release date in order to support them. Unanticipated music releases like these injected excitement into the otherwise dull experience of self-isolation.

Artists also found ways to continue live performances, with some changes to the original plans. The “Video Music Awards” (VMAs) were the first award show broadcast since the onset of the pandemic, followed by the “Academy of Country Music Awards” (ACMs) a month later. There was no live audience at these shows, and performers at the ACMs were spread across three different locations in Nashville. Some artists like Lady Gaga and Ariana Grande also performed with masks at the VMAs.

Musicians kept spirits up and promoted their music with livestreams and casual and spontaneous performances from home as well. The “Global Citizen One World: Together At Home” digital show was curated by Lady Gaga and attracted a massive number of performers that included Paul McCartney, John Legend, Kacey Musgraves and Elton John. The virtual event garnered almost $128 million for healthcare supplies and workers on the front lines.

The United Kingdom held their first major socially distant in-person concert in August, one of the innovative ways used to keep the music industry alive while also ensuring the safety of fans. The concert was outdoors and viewers were seated on separate and socially-distant platforms. Also, drive-in concerts have been a recent popular choice for some musicians.

While experts predict normal live shows will return around late 2021, the safety of concert goers and music artists is the primary concern. Until then, fans of music can enjoy new ways of attending live concerts amid COVID-19 as well as the new releases that time in self-isolation has sparked.