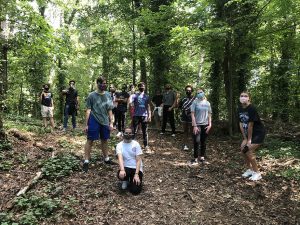 The actors of “As You Like It” pose as they take a look at their outdoor set. Photo: Sean Bryan

Although the student actors social distance and wear masks at school, many had concerns at the start of the year about how performances could be pulled off safely.

But Performing Arts Department Chair Sean Bryan has developed a plan to produce William Shakespeare’s comedy “As You Like It” to the Pace community in November, date to be determined. “We have really been working on the fundamentals of acting Shakespeare, which is very different from just reading it in English class,” said Mr. Bryan. When acting, you have to focus on the individual characters.”

Mr. Bryan said that the production is being filmed by Pace alumnus Andrew Riley ’10. He has been following the socially distanced and unmasked actors around the Pace campus from scene to scene. “There will be no stops when filming because I want it to be less like a movie and capture the essence of a live theatre production, similar to ‘Hairspray Live on TV,’ said Mr. Bryan.

“I think this show is helping me to read and think about the lines rather than an action to go with it, and my only critique is that some shots are a bit too long and played out as if it’s on a stage, said freshman Jackson Allegra. Allegra is just one of many cast members who are working to produce a high energy and comedic show.

“I think being able to take multiple takes of one scene will be helpful for the cast, instead of just having one try in a live show,” said senior Audrey Holton. This approach will leave seniors with a special send off to end their Pace theatre career, as the new technique of filming and acting is a new experience for the veteran actors.

Mr. Bryan loves live theatre, and filming a live performance was something he wanted to try whether or not COVID-19 was a factor. At the same time, he is disappointed by the inability of the audience to see the last scene, a wedding, in person. He said that it provides greater comedic impact when performed live and face to face.

The film of the show will be presented in the Pace Fine Arts Center (FAC) to masked parents, students and faculty once editing of the film is completed. “We would prefer for the audience to see the show live, rather than watching it on their computers, so that the actors and the audience can experience the show together,” said Mr. Bryan.

Shakespeare’s “As You Like It,” first written in 1599 and first performed in 1600, is set in France. It begins in the French court and moves toward the Forest of Arden. The story captures the adventures and love stories of the Duke’s two daughters, Celia and Rosalind. Some of the main characters include Rosalind, played by senior Alivia Wynn, Orlando, played by senior Jack Carson, and Olivier, played by senior Denzel Welsh.

“The main reason why I selected this play was because of the personalities and large number of characters,” said Mr. Bryan. “The woods location is also incorporated at the top of Pace mountain. The location really works for the concept of the play.” “It is interesting to film such a complex show around the campus like the tennis courts and castle,” said sophomore Jack Schmitt. “It shows a cool contrast between modern and historical times.” Schmitt’s interest stems from his love for old productions that are then altered with a modern twist.

The actors are mic’d, due to social distancing, but Mr. Bryan says the choice of Shakespeare was also influenced by COVID-19. The immense number of narratives, while less interactive with characters, perfectly fits with the constraints of social distancing.