Joe Russo Talks with KN about His Career in Film, Television 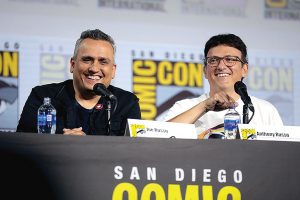 Marvel fans everywhere know Anthony and Joe Russo, brothers with numerous directing and producing credits for films and television shows. They’ve directed blockbuster films such as “Avengers: Endgame,” the highest grossing movie of all time. The Knightly News had the opportunity to interview Joe Russo, one half of this dynamic duo, about his career.

For Russo, it all started at a young age. He enjoyed watching films with his older brother Anthony. “I always loved movies,” he said. “They were a really important part of culture for us.”

In high school, Russo began watching more independent films. “I started to appreciate movies more artistically and thematically,” he said. He learned about the metaphors, imagery, dramatics and social context of movies rather than focusing solely on the plot. “It opened up a whole new dimension to films for me.”

At 20 years old, Russo was working toward his degree in acting at Case Western University in Cleveland, Ohio. He enjoyed acting, but he decided that he did not want to pursue it any further. Instead, he moved toward what he truly enjoyed: directing. “I had the opportunity to direct a few plays while I was studying acting, and I really got the directing bug, and I think that’s what inspired me to become a filmmaker.”

The Russo brothers directed the shows “Arrested Development” and “Community,” which were critically acclaimed but didn’t make a lot of money. Their first big success was “Captain America: Winter Soldier,” when they began working with Marvel. They went on to direct three more Marvel movies, “Captain America: Civil War,” “Avengers: Infinity War” and “Avengers: Endgame.”

Russo’s favorite project he has worked on is “Avengers: Endgame.” “We were very close to that cast and we’ve been working with the same crew for 15 years; they’re like family,” he said. “It was a really powerful movie to sit in the theater and watch with an audience. The way people responded to that movie I would say is probably the highlight of my career.”

Russo has had the opportunity to work with many famous actors, including Tom Holland, Chris Hemsworth, Robert Downey Jr., Chris Evans and Scarlett Johanssen, but he says it is difficult for him to pick favorites. “It’s like saying who’s your favorite child.”

Since the COVID-19 pandemic has greatly impacted the film industry, Russo has done most of his work on Zoom. “It makes it much more difficult to execute because movies require lots and lots of people in an enclosed space together, which is really dangerous during COVID,” he said. Now on set, standard precautions are taken, like testing, temperature taking, social distancing, mask wearing and isolating in bubbles. “It’s certainly made things more difficult, but everyone’s persevering and doing well,” said Russo.

This past fall and winter, the brothers made a movie called “Cherry” with Tom Holland, who plays an Army medic with PTSD. He struggles with opioid addiction and turns to robbing banks. The movie will premiere on Apple in 2021. “Tom is amazing in the role,” said Russo.

Currently, the brothers are working on “The Gray Man,” starring Ryan Gosling and Chris Evans. Starting in January, they will shoot in Los Angeles, Prague and Thailand. “That’s really what our main focus is at the moment.”

In 2017 and 2018, the brothers and their families lived and worked in Atlanta. “I love Atlanta, said Russo. “I kind of miss Atlanta. We had a great experience at the studios there. Everyone is so friendly.”

Russo expressed how much he loves working with his brother, saying, “It’s great being able to work so closely with family. We support each other and take care of each other.” With such a difficult, demanding and draining job,  Russo says that it helps to have Anthony as his partner. “Having a partner that you can rely on when you’re exhausted is invaluable.”

Russo said that the person who has been most influential in terms of his career is his father. “He really supported our first movie, helped us out financially, helped us get it made. It was a really big risk for him, and he took that risk.”

Russo had some advice for Pace students who want to work in film: “You guys live in an incredible time where you could pick up an iPhone and shoot anything and it can look great, and you can use technology to your advantage. So I would say film things and put them on social media and YouTube.”

In fact, that is how Russo discovered Donald Glover, also known as Childish Gambino, who grew up in the Atlanta area. “He was making comedy shorts with his friends from NYU on an iPhone and putting them together, and somebody forwarded it to me and said this guy is hilarious,” said Russo. He ended up casting Glover in “Community.”