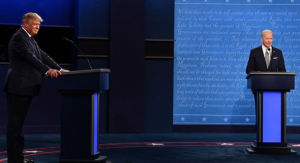 Donald Trump and Joe Biden face off during the first debate hosted by Fox News on Sept. 29. Photo: @foxnews on Instagram

For every presidential election, the Pew Research Center publishes studies and surveys of the most important issues to American voters. These issues include the economy, healthcare, crime, COVID-19 and others. Presidential candidates Donald Trump and Joe Biden are running on very different platforms this year, but there are some similarities. Below is information derived mostly from the official Joe Biden and Donald Trump websites and also from their past records as politicians.

President Donald Trump signed the first major tax reform in over 30 years. This provided tax relief for over 80% of middle class families and lowered taxes for small businesses as well as corporations. Trump also wants to lower the capital gains tax rate from 23.8% to 15%.

Joe Biden seeks to overturn many of Trump’s tax reforms. The income tax rate on the highest tax bracket would revert back to the pre-2018 rate of 39.6% for people with taxable income over $400,000, while the rates for other Americans will stay the same. Additionally, the capital gains tax would rise from 23.8% to 39.6% for people with taxable income over $1 million and the corporate tax would increase from 21% to 28%.

The two candidates share some similarities and differences on the issue of healthcare. Everyone can agree that the healthcare system (both public and private) in America is a mess, and both candidates support change. The president’s proposals on healthcare have been vague and no concrete plan has been released. He is in favor of repealing the Affordable Care Act, which would jeopardize affordable coverage for those with preexisting conditions.

Short of that, however, Trump has quietly been implementing change based on the premise of choice and competition. He repealed the individual mandate that forced low-risk Americans to be insured. This meant that millions of people, over 80% making less than $50,000 a year, no longer have to buy health insurance coverage. It does, however, mean that millions more people are uninsured.

Trump also has increased competition for drug companies in America by going overseas for suppliers. Thus, drug prices have lowered for the first time in 50 years.

Joe Biden supports the expansion of the Affordable Care Act by increasing market subsidies and offering a new public option available to those in the individual market. He also plans to lower the Medicare age from 65 to 60. This plan would expand healthcare coverage for 15 to 20 million people. The Committee for a Responsible Budget estimates that Biden’s plan decreases national expenditures by as much as 3% or increases them by as much as 1%. Similar to Trump, Biden supports the use of overseas suppliers for prescription drugs, resulting in lower drug prices.

Back in 2016, President Donald Trump ran on the platform of being strict on immigration from the Southern border. Although a wall stretching across the border was not built, he still implemented many policies hindering illegal immigration. He did update and build more fences/walls along the border but ran into opposition from Congress. Under the Trump administration, the Department of Homeland Security sought to eliminate protection for immigrants under the Deferred Action for Childhood Arrivals (DACA). However, those efforts were blocked by the Supreme Court.

Through roughly 450 executive actions, the Trump administration has rolled back all immigration to levels not seen since 1987, according to The Washington Post. The administration has turned away immigrants seeking asylum from entering the United States through established U.S. ports of entry, relocating them to nearby Mexican border towns, and thus limiting the number of asylum seekers entering the country at one time. Some have waited weeks and months in Mexico to submit their requests to U.S. authorities for asylum. In addition, the administration has regularly denied the admission of refugees, immigrants who are fleeing persecution and violence who apply to enter the United States while still abroad.

Trump also signed an executive order disqualifying sanctuary cities from federal aid and targeting the MS-13 gang, one of the most dangerous gangs in the world.

Joe Biden holds a more humanitarian view on immigration. One of the major differences between Biden and Trump involves DACA. Unlike Trump, Biden wants to protect and expand the DACA program, ensuring that Dreamers will have access to federal aid including grants and loans. For adults, he endorses the creation of a roadmap to citizenship for the 10+ million illegal immigrants in America. With over 70 million displaced people in the world, Biden’s plan would increase the number of refugees coming into our country today.

On Oct. 2, Donald Trump and the first lady announced that they had tested positive for the coronavirus. After a three-day hospital stay, the president reported feeling well and went on to resume his duties in the Oval Office and campaign trail. On January 31, Donald Trump blocked travelers from China (U.S. residents and family members or spouses of U.S. residents or citizens were exempt from his order). The first American tested positive for COVID-19 on Jan. 21. Then on Mar. 11, Trump closed travel to and from Europe, leading up to the declaration of a national emergency two days later.

The national shut down was declared on Mar. 17 which caused unemployment to skyrocket and markets to drop. At this point, Trump prematurely said that he saw the country opening up by Easter. In response to the economic decline, Trump signed a 2.2 trillion dollar spending bill that supplied aid to individuals, hospitals, small businesses and state and local governments and included $500 billion for U.S. industries and corporations.

Joe Biden and his supporters believe that Trump has done a poor job of handling the coronavirus and lost valuable time in the early months when the U.S. could have put forth more effort to contain it. Trump opposes national mask mandates and a second shutdown of the economy. Biden hopes to implement national mask mandates. While Trump is urging schools to reopen, Biden seeks a slower approach to ensure the correct safety precautions for reopening. They hold some similarities with their approach to a vaccine. Both want the widespread distribution of a vaccine at an affordable price so every American has the opportunity to be vaccinated.