Softball Makes First Round of Playoffs 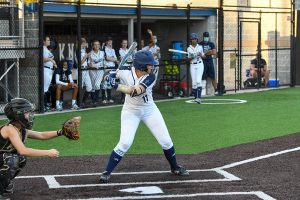 The girls softball team made it to the first round of the playoffs for the second year in a row, playing Pepperell High School at Charlie Owens Field on Oct. 19. Despite hanging close in the first game of the doubleheader, ending 2-4, the girls lost 1-8 in the second game. “It’s really sad knowing the season is over and that I won’t be able to play with this team again,” said senior captain Sydney Silverstein. “I know that they are going to do great next season.”

Softball had a busy regular season this year, playing almost 30 games and going 12-15-1. This includes only two region losses, both coming against Lovett, crucial games when it comes to playoff rankings. The team was able to outsource local rival Westminster twice this season 4-3, and 9-1, an incredible feat considering the programs successful history. “Someone hit it to right field and they caught it, and there was a very close play at home which could have gone either way,” said sophomore Victoria Hadley describing the team’s win against Westminster on Sept. 26. “We beat the throw by sliding under it and ended up scoring the winning run.”

Complementing the two Westminster wins were wins against Woodward, Holy Innocents’ and Campbell High School. “My favorite moment this year so far was seeing the girls win their games against Westminster and Holy Innocents’,” said Assistant Coach Lauren Hadley on Oct. 19. “They did not have a great start but they came together and found a way to beat both teams and I think that was the turning point for the season.”

As with other sports teams, the girls had to take safety precautions this season given the COVID-19 pandemic. The softball team was fortunate enough to be one of the first teams allowed to practice due to the natural social distancing of the game. Softball is mostly a non-contact sport, with the fielders spaced out at least six feet at the start of each play. The only players who are not six feet apart are the batter and catcher. But all players were wearing masks, so there was little concern even for these athletes. “Wearing masks and socially distancing mainly affected us by limiting our ability to cheer on our teammates from the dugout,” said junior Marissa Goodman.

There were some other noticeable rule changes this year: each team had their own set of balls, mound visits had to be socially distanced, and fan capacity was limited. Another indirect effect of the virus was the mental side of not knowing what was to come in the future. “We just didn’t know what to expect at so many different points throughout the season,” said Head Coach Armando Vizcaino-Santiago.

While also adapting to the special circumstances with the coronavirus, the team had to adapt to a new coaching staff. “There was also a complete coaching staff change, and the different ways they coach had a big impact on this year’s season,” said sophomore Victoria Hadley. Long time head coach and math teacher Jewell Marable stepped down from coaching this year and was replaced with Coach Vizcaino-Santiago, who teaches third grade at Pace. “In a year with so much uncertainty, these ladies have shown grit and perseverance when it has mattered most,” said Coach Vizcaino-Santiago. “I especially want to thank our senior captains, Jamie Kornheiser and Sydney Silverstein, for leading by example.”

Alongside the head coach, former Pace softball star Lauren Hadley ’15 joined the coaching staff. “I love being back at Pace,” she said. “When I was a student and player here I loved the environment and the community as a whole.” Hadley is the older sister of sophomores Victoria and Madison Hadley, both of whom play on the team.

“She is definitely one of the hardest on me because she can be, but I think it’s pretty beneficial to my overall playing,” said Victoria Hadley. Lauren Hadley noted that one of the reasons she actually returned to Pace was to see her sisters more and spend more time with them.

The team this year was tasked with replacing Molly Buffenbarger and Caroline Landis from the Class of 2020. The two played vital roles on the team last season, and Landis continues her softball career at Bowdoin College. With the loss of these two seniors, the team was left with only 11 players this year. While the team still had lots of talent, only rostering 11 players means having no substitutes. This put lots of pressure on the three pitchers the team has had to cycle through: Silverstein, sophomore Sophia Mador and Madison Hadley. Despite the pressure put on them, Coach Lauren Hadley noted that “learning how to work together on the field and support each other is one thing they have improved on the most.”

Although the players fell short of their goal to go far in the playoffs, the girls did not define themselves by wins and losses. “We are a really close knit team and over these past four years they have become my best friend,” said Silverstein. The overall goal for the team was to do their best and have fun. “One of the best moments of the season was the rain delay in Dalton when the field was literally mud, and we just got to hang out and slide in the mud,” said Goodman.

The team also had themed practices. “We have had neon, USA, and white lies,” said Silverstein. “We go all out and it was really fun to be with everyone.”