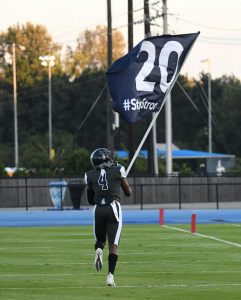 Senior Jayden Thomas runs across the football field before the home game on Oct. 1 with a flag that reads “20 #StayStrongSloan.” Photo: Fred Assaf

The number 20 has been ever-present on our minds in recent weeks. Since sophomore Jordan Sloan’s injury during the Pace Homecoming game against Westminster on Sept. 25, the community in and around Pace has rallied together to support Sloan and his family in any way possible.

On Sept. 27, Pace organized a prayer vigil at Riverview Athletic Complex. Hundreds of students from every grade, along with Pace faculty and parents, attended to show their support for Sloan. The Lovett School hosted a similar event on their campus.

That same day, a GoFundMe page that was created by Susan Chana and Betsy San Miguel, friends of the Sloan family, went live. Since then, the page has raised over $226,000 in support of his recovery. Over 2000 groups and individual donors have contributed, including the Holy Innocents’ football team; Marist football families; St. Pius X football, cheer, and sports medicine teams and families; and the Westminster cheer and football families.

Atlanta Falcons quarterback Matt Ryan and former Falcons wide receiver Roddy White both expressed their support for Sloan. “A lot of things happen that are so unpredictable in life and we have to come together to help so let’s help Sloan and his family reach their goal,” White wrote on Twitter. The University of Miami football program, Sloan’s favorite team, posted an image of him on Instagram with the message, “We Are in this Together.”

The Pace football game against McNair High School on Oct. 1 was the team’s first since Sloan was hospitalized. Before the game, the team received shirts that read “#StayStrongSloan” with his number on the back. The theme for the evening was orange and green, the colors of the University of Miami. During the game, McNair’s principal and athletic director presented Head of School Fred Assaf and Jordan Sloan’s grandmother a framed picture and posters of Sloan.

Before their game on Oct. 2, the Westminster football team took to Instagram to announce they would be sporting “JS20” stickers on their helmets. The Pace football team did this as well, and the varsity softball team followed suit. In addition to the helmet stickers, the softball girls wear bands around their legs with the number 20.

In order to keep Sloan in everyone’s thoughts and prayers, the Student Council handed out buttons with his number on Oct. 5. When junior Edward Blaha broke the school cross country record for the 5K on Oct. 3, he had “JS20” written on his arm. Senior football captain Justin Johnson is now wearing Sloan’s number.

Students, both in and out of Pace, are supporting Sloan in any way they can, and we all are keeping him in our thoughts and prayers. To donate, the link is here.