Club Fair: A Look at the Lesser Known Gems 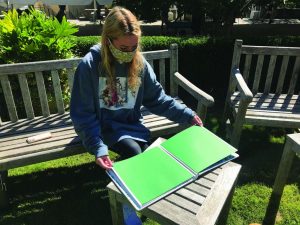 It seems like only yesterday when we were shoving ourselves through the crowd at the club fair, racing to get a spot at the ever-popular Women Mentoring Women and Model UN tables. This year no one will have to wade through that sea of people. Due to COVID-19, the club fair is entirely online.

On Oct. 9, the club fair will be hosted during the morning Zoom assembly. Each club will show a short video exemplifying their club, and then students will sign up for the clubs they want to participate in on a Google form.

Most students are aware of the more popular clubs, but what about the newer and underground ones? Although not as well known, these clubs can be some of the most interesting and most important clubs at Pace.

Social Justice Club may be more important now than ever before. Run by junior Allison Silverboard and senior Olivia Ullman, this club sets out to not only raise awareness but to take action on social justice issues. “We don’t want the energy of the Black Lives Matter movement to die down,” said Ullman. “We want to keep the momentum going.”

Their plans for this month include creating mini voting pamphlets and guides with reminders to vote, along with information about the candidates. “We won’t only be talking about the election, but we will also highlight different sections of social justice, like climate change and issues with ICE and immigration,” said Ullman.

In their meetings, they will give PowerPoint presentations but also brainstorm on how to impact specifically Pace. They emphasize action: signing petitions, organizing protests, and boycotting certain brands will be a huge aspect of being a part of this club. “Little actions will add up in the Pace community,” said Ullman. “The first step is to make people aware.”

Chess Club may seem intimidating but the leaders of the club, seniors Michael Fu, Harley Ryan and Dylan Kaminski, will assure you that it is not. “Chess goes hand in hand with the whole idea of being super smart,” said Fu. “That’s just not the case. It’s just a game that anyone can play.”

Chess club is just what it sounds like – and more. Not only will people who join play chess, but they also can learn how to play. At the end of the year, there will be a school-wide tournament. Last year, this tournament ended up lasting seven to eight months. Who knows? Maybe you will be the winner. Fu has also issued a challenge to all prospects: “If you beat me in chess, I’ll buy you Chick-fil-A at lunch.”

Girls Who Code is led by junior Sydney Faux, and the club sounds just like the title: girls (and those who identify as non-binary) getting together to learn, or continue to learn, how to code. Meeting in the mornings, this club lets girls code whatever they want from Python to website making. “As a girl, you are an underrepresented minority when in computer science,” said Faux. “It’s really important to change this gender gap, and that’s why I lead this club.”

Even better, programming can be done anywhere. This means no worrying about COVID-19 and social distancing. Even in this individual environment, Faux stresses the importance of collaboration. “We use each other as sounding boards to fix our code and help each other. Collaboration is always important.”

Scrapbooking will be casual and fun, outside or over Zoom, and Hartman and Mr. Kaufman will help members of the club get started and inspire members with their scrapbooks. “It’s helpful to have a group of people to go to to help with that,” said Hartman. At the end of the year, everyone will present their scrapbooks to not only the club but parents and teachers as well.