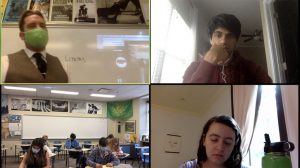 As the COVID-19 pandemic continues to impact schools around the world, students of all ages have had to adapt to taking classes online. This is true of Pace as well, which continues to offer its students the ability to attend classes virtually even as it opened its doors physically for the new school year beginning on Aug. 12.

During the summer, the number of new COVID-19 cases in the United States increased from around 18,000 to over 75,000 daily. Within Georgia alone, the average number of new cases per day increased from around 800 to over 4,000. Since then, schools that have reopened in the Atlanta area following the summer break have witnessed a similar rise in COVID-19 cases within their communities. Families who spent their summer traveling either inside or outside the U.S. became potential threats to furthering the spread of the virus.

Although the vast majority of Pace students have returned to attend school in person, some students have chosen to take their classes virtually out of concerns regarding the safety and welfare of their families and themselves.  But not all share the same reason for attending school on Zoom. “It’s just been very odd.” said junior Jermiah Polk, who lives almost 35 miles away from Pace. Polk’s father works for Beecher Hills Elementary School, a part of the Atlanta Public School system. Because all Atlanta public schools have started the year virtually, Polk’s father is unable to drive him to school as he has in the past. “Overall, it’s OK, said Polk. “It could be better, but given the situation that we are in right now, it’s OK.”

There were a total of 37 students across the Upper School who started the year virtually on a daily basis. That number has since dropped as students have become more dynamic with their learning process. Some students have made a permanent change to attending school in person, while other students continue to switch back and forth between virtual and in-person learning.

One of the more substantial concerns which students and faculty both shared was with the technology of Zoom. Was the technology going to work better than what was experienced last spring? According to some students, that doesn’t seem to be the case. In fact, there doesn’t seem to have been much improvement in terms of connection and WiFi stability despite the efforts of the Pace tech team. On top of that, as Pace merged both their online academia with in person, a new set of challenges has emerged.

“Sometimes the audio can be really really bad,” said senior Katherine Khajavi. “There have been a few times this week where I just could not hear anything at all.”

One of the biggest problems this year has been with the audio. Without any proper microphones attached to either teachers or students, the audio feedback has been extremely muffled, making it difficult to understand what’s being taught at times. This has been a problem across all grades. “It’s hard to hear everything that the students say,” said sophomore Caitlyn Pinsker. “It’s harder to participate in some classes.”

According to Class of 2022 Dean Ben Ewing, some teachers have already started troubleshooting the problem, and have adjusted the preferences within Zoom to eliminate background noise. Upon changing this setting, he reports that students in his class “have had much less difficulty hearing their peers.” Mr. Ewing added that some teachers have tried other solutions such as connecting stronger microphones to their computers, while others are using AirPods as the microphone.

Khajavi and Pinsker’s decisions to go online this year both stemmed from family concerns. Khajavi, who frequently visits her grandmother, was worried about how her interactions at school would affect her health. “It’s just not a risk I’m willing to take” she said. On the contrary, she is taking extra precautions to protect her grandmother, getting tested every few weeks. “It’s always negative,” she reports.

Pinsker and her family, on the other hand, decided it would be best to hold off on heading back to school considering how high the COVID-19 numbers were in Georgia. “I think that in the next few weeks if no one gets COVID and things are looking pretty good, then I’ll be able to go back to school,” she said. “I just wish since everyone else is back, I could be back too.” All three students agreed that one of the hardest parts of online learning was seeing everyone else back physically, and not being there with them.

This is even more of a challenge for freshman Rachel Daneen, who is new to Pace. Being both online and a new student, Daneen has had to adapt in the way that she has settled into Pace. “It’s harder to meet people,” she noted, “but picking up the pace of things hasn’t been as hard.” She has found that, academically, being online has had its benefits in helping her get settled into Pace and high school. “It’s good because I can email teachers and talk to them more easily,” she said.

Nonetheless, getting to know the rest of her grade hasn’t been quite as straightforward as she would have hoped. “I don’t really know that many people,” she said. “I’ve met a few people but I really can’t see that many people on a daily basis.”

When the freshmen got together for the scavenger hunt on the first day of peer leadership, since Daneen was on Zoom, she was unable to participate. She has also had to Zoom in for subsequent peer leadership meetings, which has taken away from the bonding experience. On top of all of this, she also faces the technical difficulties of Zoom along with the rest of the online community.

When asked if there is anything that could be improved with the overall zoom experience, all four students had a similar response. “Some teachers end up focusing on the people in person more, and those who are on Zoom are just kinda sitting there listening,” said Polk. “I can’t really ask questions,” Khajaviv added, outlining the struggles of grabbing her teachers’ attention at times. Despite this, all the students appreciate the efforts that all their teachers are making. “I think for the most part the teachers are doing a really good job trying to include the virtual kids,” said Pinsker.

Beyond the technical issues and classroom dynamics, there are a different set of challenges that virtual kids face. Being on a laptop for hours straight while attending back to back classes can become extremely tiring. “It’s hard to stare at a screen for a long while,” said Dannen. In addition, there is the frustration of not being able to see friends. For now, however, these four students plan on continuing with their virtual agenda.