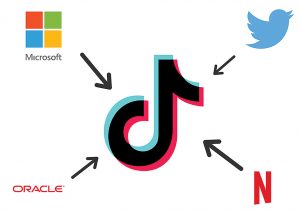 Business analysts saw these four companies as the most likely candidates to reach a deal with TikTok after President Trump’s Aug. 6 executive order. Illustration: Sam Webb

As tensions rise between the United States and China, TikTok – the popular app with over 80 million monthly users, diehard fanatics and Charli D’Amelio – continues to receive scrutiny. On Aug. 6, President Trump signed an executive order requiring ByteDance (TikTok’s parent company) to either sell or spin off its TikTok business in the U.S.

The order stipulated that all U.S. transactions with ByteDance would be blocked after Sept. 20 if these conditions were not met, due to national security concerns. TikTok is a video sharing platform that specializes in lip-syncing, dance and humorous videos of 15-60 seconds.

On Sept. 14, Oracle struck a deal with ByteDance that would make Oracle TikTok’s U.S. partner. Under the agreement, ByteDance would still hold a majority stake in the company and Oracle would own around 20%. In the past, Mr. Trump has expressed great respect for Oracle and the company’s chairman Larry Ellison. Oracle’s cloud systems, which compete with Microsoft and Google, are subject to reap great benefits from their new position and catch up to their competitors.

Then, just before the Sept. 20 deadline, Walmart partnered with Oracle to create a new entity: TikTok Global. The new company will be headquartered in the United States. Some are critical of the deal because ByteDance still will hold majority ownership in TikTok. However, President Trump has approved the deal “in concept,” according to National Public Radio (NPR). This approval is powerful enough to override the ban which was scheduled to go into effect at midnight on Sep. 20. Analysts say that Walmart can now expand their e-commerce sector to a particular demographic, young people, and possibly sell their products on TikTok. The deal still needs to be finalized by Oracle and Walmart, as well as by the Committee on Foreign Investment in the United States.

TikTok’s biggest opponents claim that the app is a decoy for the Chinese Communist Party’s surveillance on the American people. Others viewed the Trump administration’s executive order as a result of rising xenophobia and diminishing relations between the U.S. and China. There is no proof of either, however there are concerns that TikTok is gathering user data. This user data could be used for cyber breaches targeting American institutions, some of which have already occurred, according to U.S. officials.

Although these growing concerns cannot be disregarded, experts agreed that banning TikTok is an overreaction. Executives at TikTok have repeatedly stated that China has no jurisdiction over U.S. operations and that China has no access to personal information stored by the app. Regardless, TikTok’s privacy policy states that it shares user information with a “parent, subsidiary, or other affiliate of our corporate group” otherwise known as ByteDance, the Chinese-owned company. Given that language, there is a possibility that TikTok sends user information to China, but nothing has been proven, according to Wired.

All of this scrutiny has forced TikTok to distance itself from Beijing. Over the past months, the app has taken its offices out of China and Hong Kong. Additionally, hundreds of thousands of dollars have been spent on lobbying efforts in Congress according to Bloomberg.

Despite attempts by TikTok to keep the app in the present ownership’s hands, the most likely scenario was for an American-based company to buy the app’s U.S. operations. Among the potential buyers were Microsoft, Oracle, Netflix and Twitter. Bill Gates’ Microsoft had been talking with ByteDance for months, starting at the beginning of summer 2020. The company was considered by many analysts most likely to make a deal, hence their 1.73 trillion dollar market capitalization. A deal with Microsoft could have caused the value of TikTok, as well as Microsoft, to skyrocket. The price of TikTok is unclear, but rumors range from 20 billion dollars to 60 billion dollars according to the New York Times.