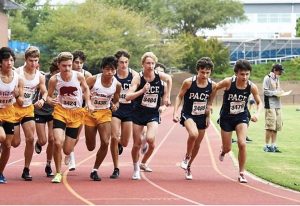 The boys and girls varsity cross country season is well underway with the region meet in less than a month, defying COVID-19 and bringing numerous victories back to Pace.

But the coronavirus has impacted the cross country team along with other Pace sports, preventing the team from training in large groups and stretching together. Fewer teams have been accepted to meets and the tents, acting as bases of operations, are significantly spread out. Varsity boys head coach Steve Cunningham split the runners into two groups; however, he soon reunited them, hoping that the senior leaders would establish a formidable, unifying chemistry with the new additions.

Runners trained throughout the summer, hoping to be fully prepared for the competitive fall season and the state championship. At meets, the teams have been limited to only racing their top 10 or 12 runners, which has been an adjustment for all participants.

The major invitational races have been cancelled, and the Knights’ schedule has changed a bit. GHSA moved the Pace athletics program down from division 3A to 2A, with the Knights now taking on new opponents such as McNair and KIPP Atlanta Collegiate. Lovett and Pace are the only two private schools in the 2A division.

The boys varsity top seven consists of juniors Edward Blaha, George Blaha, Robert Mallis and Grant Thompson, and seniors Robert Houser, Sean Glennon and Sam Webb. At the Battle at Sandy Springs on Aug. 29, Edward and George Blaha, along with Webb, all set personal track records in the 3200. Edward Blaha was selected MileSplit GA’s runner “Who Won the Week” in GHSA Class AA after the NEGA Championships. He placed third in the 3-mile race with a time of 16:51. The varsity boys team overall has a record of 3-1.

Freshman Matthew Wells is a powerful component of the boys top 12. “I feel the pressure to do my best because I’m going up against all the upperclassmen, but everybody does support each other on the team, so I feel like it takes some of the pressure that would be on me off,” he said. The juniors believe he will act as one of their leading runners next year and look forward to seeing what else he brings to the table during this season.

Freshmen are also a prominent element of the girls varsity team, with four in the top seven: Ellie Arenth, Emmy Batista, Caroline Hood and Wells Howe. Rounding out the top seven are juniors Laura Arenth and Kate Jonas, and senior Hanna Vincent. “Hanna inspires me because she’s an amazing runner and such a good leader,” said sophomore Maddie Swartz.

The girls are off to an excellent start this year, with everyone getting to race on Sept. 16, according to head varsity girls coach Jolie Cunningham. The connection established between the upper and lowerclassmen has already raised team chemistry in the time of COVID-19. “Leadership by example is so important in this sport,” said Coach Cunningham.

According to Athletic Director Chad Wabrek, the girls won first place at their meet in Athens, finished seventh out of 18 in the championship division at the Carrollton Invitational on Sept. 12, and placed second at Westminster on Sept. 22. Laura Arenth was named MileSplit GA’s runner “Who Won the Week” in GHSA Class AA after the Carrollton meet, where she finished 10th with a time of 20:45.