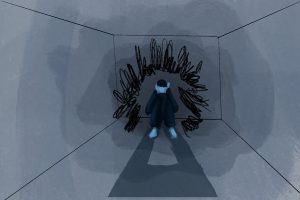 It has been six months since Pace was forced to shut its campus and shift to virtual learning last March, but COVID-19 continues to wreak havoc on people’s lives. Beyond the physical and economic repercussions, the coronavirus has taken its toll on the mental health of many in the U.S. and elsewhere. Still, many people avoid seeking help when it comes to mental health because they do not want to be perceived as weak by family and friends.

“Unfortunately, negative attitudes and beliefs toward people who have a mental health condition are common,” says The Mayo Clinic on its website. The medical center goes on to provide numerous methods that one can use to deal with this stigma, one of them being to avoid isolation by “reach[ing] out to people you trust for the compassion, support, and understanding you need.” But, as the world continues to combat the COVID-19 pandemic, avoiding isolation has become more challenging than ever as face to face interaction is discouraged due to safety concerns.

A recent study by the Kaiser Family Foundation reported that there has been a significant increase in symptoms of anxiety and depression in adults. In May, the weekly average number of adults in the United States reporting symptoms of anxiety or depression during the pandemic was at 34.5%. This number rose to 36.5% in June and to 40.1% in July. In the first half of 2019, just one year ago, only 11% of adults reported symptoms of anxiety or depressive disorder. This dramatic increase is largely attributed to stress caused by isolation during the COVID-19 pandemic.

Whether they be introverts or extroverts, humans are a social species. Science teacher Kaylan Haizlip, despite identifying herself as a “classic introvert,” says her mental health has been impacted by the isolation she’s experienced in recent months. “I felt very happy early on in quarantine but then, later on, it started to negatively affect me because I wasn’t able to talk to anybody when [Zoom] school was over.”

Dr. Haizlip said that Initially, Zoom calls seemed to “satisfy [her] social needs,” but gradually her longing for human contact increased as she began to realize the importance of human interaction. “I think the thing that has affected me the most, other than just interacting with people, is physical touch,” she said. “I’m not really a hugger, but I realized that I do need a hug occasionally. I’m missing hugs.”

Adults are not the only ones whose mental health is affected as a result of isolation. According to Newport Academy, a non-profit therapy program for adolescents, socially isolated teens often experience chronic loneliness, which can result in increased stress, difficulty sleeping, increased incidence of alcohol and drug use, higher levels of depression or anxiety, and hopelessness.

Junior Hannah Genser said that she lost “tons of motivation” during quarantine. “I started to go to bed really late, watch lots of TV and stay inside a lot,” she said. “I also lost motivation to play soccer which I normally love.”

While most schools around the country continue their learning remotely, Pace reopened its campus with many new safety measures in place. Being able to learn in person and have socially distanced interactions with friends is improving the spirits of many Pace students and teachers alike. Put simply in the words of Genser, “I like to be around other people because it makes me happier.”

Upper School Counselor Sara Eden pointed out “how much happier people are being back at school.” “Now I see many people worried about going back to [isolation],” she said. “To be able to continue in-person learning, which is so important for everyone’s mental health, Pace students must continue to do their part in social distancing and keeping the community safe.”