Black at Pace: Where Do We Go from Here? 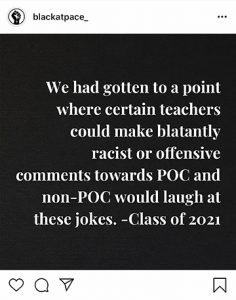 This summer, the Pace community watched as marches and protests for racial justice spread across our country and the rest of the world. One such march happened right in front of our school, on West Paces Ferry. However, as we addressed the injustices of the outside world, we began to reflect on our experiences closer to home. This reflection spawned the Black at Pace Instagram account.

Black At Pace first posted on June 17, saying that the account was created “to give space to current students, alumni, parents and teachers/faculty who have ever experienced racism, micro-aggressions or discrimination while at Pace.” In just 10 days, the account had generated 164 posts (many with multiple grievances) and 1361 followers before it stopped accepting new submissions.

The account caused a ripple through the entire Pace community. Posts ran the gamut from calling out specific faculty members to concerns about unjust discipline to use of the N-word among the student body. Black students were glad to see people finally being held accountable, while white students may have opened their eyes to the fact that Pace was not the bubble of comfort they may have seen it as before.

And so, a question remains to be answered: Has Pace failed its Black students?

However, being Black at Pace has many feeling lost and unsupported. From things like having to push harder to get into AP classes, to unexplained firings that seemed to be a result of racial conflict, it is clear to most Black students that the environment they are in was not built for them or those who would advocate for them. Though Pace has seemingly done its best to address this issue in recent years by creating more diversity positions and making a point to hire more Black faculty, these efforts do not change the fact that Pace has failed to create a system in which all students can feel safe and comfortable.

Though I’ve been lucky enough to not have experienced the overt racism that many of my Black peers have, I have had my own run-ins with the prejudice that our own community tries to hide. Having been here since sixth grade, it would be nearly impossible for me to emerge unscathed. From teachers doling out more punishment to me than my white peers who were guilty of the same offense, to a classmate telling me my hair looked like a “mushroom cloud” I have been made forcibly aware that I am different than most of the students at Pace. Through its masquerade as a perfectly progressive and post-racial school, Pace has left its students of color feeling somewhat alone and uncared for.

In order to properly address the many issues that are hidden beneath the surface, we must drop this guise and understand that assemblies and new faculty positions are not enough to create the perfectly welcoming environment we claim to have already achieved. Systemic changes must be made. To make changes without fixing the system we’re within is akin to using bandaids on a stab wound.

The Pace Action Plan for Racial Equity is just the first step toward making an array of changes that must be built into the framework of our community. As previously mentioned, the honor and discipline system currently in place fails to treat its Black students equally. Pace’s Action Plan addresses this explicitly, claiming that Pace will carefully “examine the culture around the school’s disciplinary system to ensure an equitable, educational, transparent and restorative process”. Though examination, of course, is the first step, it is what Pace does with their findings that will prove to be the most impactful.

The discipline system must be made equitable, and potential must be seen in all students. Though this is a more individualistic problem with racial equity, many Black students have complained of faculty unfairly seeking them out in order to discipline them. Not only that, but these same students have in turn had to fight their way into AP classes, where their white peers were able to only ask. Though systemic change is, of course, the most important, we also must address individual encounters with racist faculty and peers. All of this leads us to one conclusion; if Pace truly wants to support the students, as the administration says it does, it must be prepared for some uncomfortable conversations.