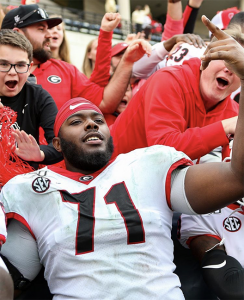 Andrew Thomas poses for a photo with his fans at a UGA game. Photo: @nolovedrew on Instagram

Andrew Thomas ‘17 is headed to New York to play for the Giants as the No. 4 overall pick in the 2020 NFL draft and Sam Sloman ‘16 was selected in the 7th round by the Los Angeles Rams.

As Pace alumnus Will Frampton ‘99 put it in a comment on Facebook, “it is impossible that any student 20 years ago could have even conceived of this as a possibility, ever.” He’s referring to the fact that the 2015 Pace state championship team had two future NFL players on it.

At Georgia, he won a Freshman All-American award after his first season. After his sophomore year, he was named first team All-SEC and first team All-American. “He’s smart and understands the game,” Pace Academy coach Kevin Johnson said. “He watches football constantly and is always studying. He wants to be the best.” During his junior year, Thomas declared that he would opt out of his senior year and enter the 2020 NFL Draft.

Sloman was originally a soccer player, but became a two-time All-State kicker for the Pace varsity football team. He was recruited by the University of Miami (Ohio) and played all four years, finishing his senior year 26-30 on field goal attempts and 34-for-34 on extra points. He was named Second team All-America by The Athletic and second team All-MAC.