Students Can Dive into Southern Culture in the Fall 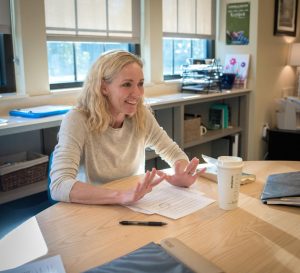 Pace will be adding one new course to the upper school curriculum for the next school year – Southern Culture: Now is Our Time. The main goal of the course is to study the history and literature of the South through the examination of past and present Southern culture and identity.

The course is a senior liberal arts elective, which can be taken as a semester-long course or as a year-long course. Upper school English teacher Katie Moss will teach the course. Dr. Moss is known for her senior English class that often utilizes film instead of books to prompt discussions and essay topics.

Head of Upper School Michael Gannon approached her about creating a new course, and after brainstorming, she ultimately landed on the topic of Southern culture. “The South has had its successes and controversies, and I realized as Pace students move on to colleges all across the country, they will have to identify or reject identification with being Southern,” said Dr. Moss.

This class will cover units called “Southern Identity: Past and Present,” “Southern Literature,” “Racism in the South: Past, Present and Future” and “Sports Culture in the South.” The course will examine film, literature, nonfiction and some historical sources as well.

Since the course can be taken year-round or for just one semester, Dr. Moss will be keeping the same units for both semesters, but will utilize different films and literature. The class will be discussion based, as students will talk about how the South can move forward, while still maintaining Southern pride and culture and making a positive impact on the United States as a whole. “I’m excited to learn about the influence Southern culture has on the rest of America,” said junior Noah Bennett.

Given the Atlanta area’s history and larger impact on the U.S., the class may also take a field trip to one or more of the following locations: the Atlanta History Center; downtown Atlanta; the Martin Luther King Jr. National Historic Site; the Stone Mountain laser show; Eatonton, Georgia (birthplace of Alice Walker and Joel Chandler Harris); and the Atlanta Preservation Center’s Druid Hills tour. A Birmingham or Montgomery trip is also possible, as is a visit with Atlanta author Tayari Jones.

“I think being able to learn by going to visit influential spots nearby will be an incredible way to learn about Southern culture,” said junior Hayden Schwartz.

“I am excited to be one of the first students who is able to take this class,” said junior Emily Butler. “I think it is very important that I learn as much as I can about Southern history.” The class is meant to foster the students’ ability to form their own personal beliefs about Southern culture.

“I am hopeful that the study will lead to many wonderful discussions about what it means to be ‘Southern,’ how others perceive the South in the country and how we can shape (and act to create) a better South by maintaining some traditions and helping the images of the South to evolve,” said Dr. Moss.