Stay Home to Protect Those Most Vulnerable 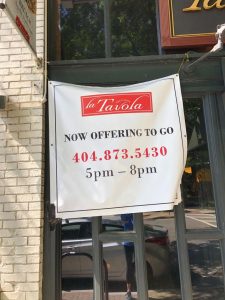 The restaurant industry took a hit from closures, but La Tavola in Virginia Highland implemented safety measures like offering shorter hours and takeout only to soften the blow. Photo: Lee Wilson

Pace has employed distance learning practices since March 16, in accordance with the Centers for Disease Control (CDC) COVID-19 response guidelines, meant to help contain the virus’s spread. At the time, the Georgia Department of Public Health reported 10 deaths in Georgia from COVID-19. As of May 7, the number of deaths in Georgia had climbed to 1,352 people, and that number is likely underreported due to lack of testing availability in our state.

The virus spreads quickly and, according to Johns Hopkins University, the mortality rate is thought to be “substantially higher than that of most strains of the flu.” But imagine how many more lives would have been lost had social distancing measures not been taken at all.

As Dr. Francis Collins from the National Institute of Health has written, “social distancing remains one of the best weapons we have to slow the silent spread of this virus and flatten the curve of the COVID-19 pandemic. This will give our health-care professionals, hospitals and other institutions more valuable time to prepare, protect themselves and aid the many people whose lives may be on the line from this coronavirus.”

After more than a month of widespread closures and lockdowns, Governor Brian Kemp announced Tuesday, April 21, that certain businesses could reopen starting as early as Friday, April 24. Kemp said specifically that fitness centers, bowling alleys, body art studios, barbers, hair and nail salons and massage therapy businesses could reopen that Friday, while restaurants and theatres could reopen the following Monday, April 27. He later lifted most other shelter-in-place orders on May 1. His decisions are not only careless and ill-advised, but also irrational and dangerous.

While Kemp’s actions could become politicized very quickly, condemnation of this call stems across all party lines, making this a question more about saving lives than mere economics. In a press conference on April 22, fellow Republican President Donald J. Trump said that he “disagree[s] strongly with [Kemp’s] decision to open certain facilities, which is in violation of the Phase 1 guidelines for the incredible people of Georgia… Safety has to predominate!”

These aforementioned Phase 1 guidelines come directly from the White House and provide guidance to all American citizens in the early stages of reopening America. Phase 1 does NOT call for the type of radical, immediate reopening that Kemp instituted.

The Democratic mayor of Atlanta, Keisha Lance Bottoms, also disapproves. “Whether or not I have the legal authority to supersede the order from the governor, I still have my voice, and I will continue to use my voice to encourage people to exercise common sense, listen to the science, and stay home,” said Bottoms on April 21.

While Atlanta’s leaders disagree over this issue, who should Georgians listen to and follow? The science.

The Institute for Health Metrics and Evaluation (IHME) is an independent global health research center at the University of Washington, and has become a credible source cited many times by the White House. IHME has created an influential model for COVID-19 projections in the state of Georgia, and by looking at the latest numbers, IHME doesn’t believe social distancing measures should be relaxed until after June 22, when other containment strategies like widespread testing, contact tracing and isolation can be observed.

Dr. Ezekiel J. Emanuel, chair of the Department of Medical Ethics and Health Policy at the University of Pennsylvania, has weighed in on why testing is so crucial. “You want to find asymptomatic carriers because they can spread the illness around,” said Dr. Emanuel. “You can’t get those people without testing and contact tracing. Georgia doesn’t have that infrastructure yet.”

Multiple other analyses of Georgia’s data warn that reopening businesses could cause another spike in infection just as the rates should be peaking. While the White House suggests that states witness a 14-day “downward trajectory” of new cases before lifting business restrictions, recent data from the Georgia Department of Public Health actually reports an upward trend the past two weeks.

Georgia is not in a position to risk residents’ health by reopening early; in the face of a pandemic, Georgia should always err on the side of caution. The New York Times reports that Georgia has the fourth-highest uninsured health care rate in the nation with roughly 16% of Georgians not having health insurance. A 2019 study by WalletHub concluded that Georgia ranked 49th out of the 50 states in terms of best access to health care.

If the residents of this state had access to more equally distributed health care resources in a better democratized medical infrastructure, perhaps Kemp could justifiably entertain the idea of relaxing social distancing measures at this time. But, he must face the truth that Georgia is not prepared.

The goal of social distancing was to help flatten the curve of the number of COVID-19 cases over time, so on what logical platform does it make sense for Kemp to stop isolation measures this early when the number of cases and deaths are still on the rise?

William Wan with the Washington Post reports that the central problem with reopening too soon is that rebounds are inevitable. “The vast majority of Americans are still believed to be uninfected, making them like dry kindling on a forest floor,” wrote Wan. “Barring a vaccine or treatment, the virus will keep burning until it runs out of fuel.”

The economic devastation that another spike of COVID-19 cases would cause is unimaginable and incomparable to the pre-existing deficit. Wan reports that opening prematurely increases the likelihood that communities will have to shut back down once infections reach a certain level again, creating multiple open-shut cycles that could further destroy the market space.

Kemp’s premature attempt to reopen Georgia’s economy leaves small business owners struggling to discern what is best. It has pitted state government against the federal, economic well-being against physical health, and personal freedoms against public good. Additionally, businesses that choose to reopen face backlash and criticism, while businesses that choose to remain closed face potentially permanent economic loss. All the while, people continue to get sick or die, and older residents and those with underlying health conditions live in constant fear and anxiety.

The last thing Georgians need during this tragic age of uncertainty is contradicting advice from authorities and radical actions that oppose scientific data. Kemp moved too early and irrationally, failing us all as residents of his state.

According to a poll conducted by the Atlanta Journal Constitution April 21-25, the majority of Georgia voters continue to support a statewide shelter-in-place mandate, with only 10% of those surveyed opposed to the idea. The AJC reports that an “overwhelming majority” – 80% – are worried a family member will be exposed, with 52% extremely or very worried.

The COVID-19 pandemic has not nearly been defeated. Of course, some new data looks promising for a better, healthier future, but reopening the economy before it’s safe to do so could be disastrous. All Georgians must be urged to remember that social distancing still remains our greatest defense against this virus – not only for ourselves but for those around us.

As people start to revisit the newly opened public spheres of Georgia, like literal bowling alleys (because they are so essential!), they should consider the following: Is the movie you’re viewing in the theater entertaining enough for your mind to escape the sinister truth that more than 267,233 people have died from this virus around the world?