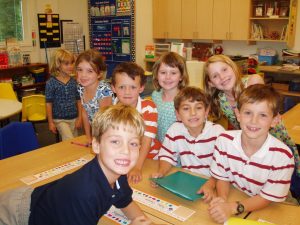 Members of the Class of 2020 start their first day of first grade. Photo: Caitlin Jones

There is no question the Class of 2020 has experienced a unique end to what is supposed to be the “best year of their high school lives,” but it hasn’t stopped them from looking back at some lasting memories from their time at Pace.

From singing “Don’t Let the Light Go Out!” at the holiday program in Lower School to years of Team Challenge competition in Middle School and dancing dressed as Dr. Seuss characters at Spirit Week in the Upper School, the seniors have made it their priority to leave their mark. Prom and GAP day had to be postponed, but in the meantime, let’s take a look at some of the most iconic memories from the Class of 2020.

The 40 lifers in the senior class will never forget Fairy Treat Friday celebrations in first and second grade and Principal of the Day when they got to see Head of School Fred Assaf get dunked in a huge tank of water, to the crowd’s delight.

“I loved the holiday parties because we always had large platters of Chick-fil-A nuggets and Lofthouse cookies,” said lifer Emily Caton. “We basically spent the whole day playing different holiday games and didn’t have any school work. I miss it.”

Senior Ben Caldwell fondly remembers Chick-fil-A biscuits and Capri Suns being sold every Thursday morning in the Lower School. He recalls taking a sip from another student’s juice pouch once, and although apologetic, he had to have a long talk with one of his teachers about the wrongs of taking someone’s Capri Sun.

“I learned that day to never steal and always ask for permission first,” said Caldwell. “It tasted really good, though.”

An eventful part of any lower schooler’s day, recess, brought energy and excitement. The playground was divided between the pre-first through third graders’ side and the daunting fourth and fifth graders’ side, better known as “Six Flags.” “I was so excited to be in fourth grade, just because I could finally go to Six Flags and play on the big basketball hoops,” said lifer Quill Healey.

Middle School was marked by playing classic games like Einsteins versus Newtons in math teacher Jesse Marshburn’s class, hearing former Head of Middle School John Anderson say “It’s a great day to learn” and of course, for the boys, searching for the Arkenstone with English teacher Pete Pope.

Senior Jimbo Smith recalls the time he channeled his inner Shaquille O’Neal when he threw down a vicious dunk on Mr. Marshburn’s mini basketball hoop. “Aman [Hashim] challenged me to dunk over him and when I did the hoop shattered,” said Smith. “It was awesome until Mr. Marshburn made us pay for a new hoop which cost, like, 40 dollars.”

Many of the senior girls remember creating a haunted house based on the novel “To Kill a Mockingbird” in English teacher Katherine Norton’s class. “The house was actually spooky to me at the time,” said senior Alexa Levine. “It was really fun, though, to scare the boys and see their reaction.”

An unforgettable moment for those who attended Pace Middle School was former math teacher Andrew Heacock’s door breaking as he was handing out yearbooks. Lifer Jared McCall was so eager to receive his yearbook and attain signatures from the whole grade that he ran from across the hall to get his book.

McCall, running fast, could not stop himself as he ran straight into the door and shattered part of the door as he collided with it. Luckily, McCall sustained no injuries, but laughter filled the air.

Team Challenge, although intended to be a fun and relaxing day, became a competitive scene for lifer Morgan Payne. To this day, he still prides himself on winning first place in all three Team Challenges that he participated in.

Then came ninth grade in the Upper School, where schoolwork demanded seriousness from the Class of 2020, but that didn’t stop them from forming lasting memories. Three seniors in particular – Ada Jane Agolli, Lucy Ferry and Dominique Turner – will remember high school as the  time they were key to helping the Knights (along with senior Sasha Ratliff who was eligible to play this year) win three straight volleyball state championships.

Between riding on Goliath at Six Flags to paddling in the Pace pool during Phlotilla, seniors remember their freshman year like it was yesterday. “I had never liked rollercoasters before going to Six Flags, but my friends convinced me to ride one that day,” said senior Jack Jacoby. “If it wasn’t for my classmates, I would never have conquered my fear and I am grateful for them.”

Driving down West Paces Ferry while blasting music the first day of senior year was especially memorable for lifer Molly Buffenbarger. “It was my 13th first day at Pace and I was so sad it would be the last one,” said Buffenbarger. “Each senior seemed so happy that day. That’s probably one of my favorite Pace traditions.”

Many of the seniors, although appreciative of their years at Pace, know it is time for the next chapter in their life. “I have had many of the same best friends for 13 years now,” said lifer Nikki Rubin. “I’m not sure how I’ll go every day without seeing them. I know that they will always be there for me and I am ready to begin meeting new friends at Clemson next year.”

The seniors will not be able to spend another assembly together in the FAC, but everyone is eager to celebrate prom, GAP Day, and graduation in August. “This is not how we wanted it to end, but I like how we have those senior events so late,” said senior Jack McCarthy. “It’s like a final sendoff a week or two before everyone leaves for college, which will be nice.”

The Class of 2020 will forever be grateful for the students and faculty that made Pace their “home away from home.” Just as we ended Spirit Week practices, it only feels right to end this article the same way – “2020 on three, family on six!”