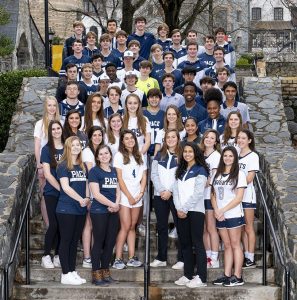 With 10 different boys and girls varsity teams, the spring at Pace is typically packed with different sporting events, ranging from baseball to gymnastics. Unfortunately, given the Georgia High School Association’s (GSHA) difficult decision to cancel the remainder of all spring sports seasons due to the COVID-19 outbreak, many seniors were cheated of their final high school season.

With a talented class of seniors spread throughout all 10 teams, there were high expectations for every sport. Beyond overall team performance, seniors had high hopes for their individual seasons. “I was looking forward to breaking 5:20 in the mile,” said senior track runner Payton Payne.

Other athletes were focused on team-oriented goals, and were looking to make it far in the playoffs. “I was excited to try and qualify for state, since we did not make it last year,” said senior golfer Ben Crawford. Senior baseball player Andrew Neville and senior tennis player Rohan Jatar had their eyes on a state title as well.

“I was looking forward to getting another chance to make a deep run in the state playoffs with my teammates,” said Neville. Jatar said he was “excited to try and get another ring, and joke around with the team.”

When GSHA was forced to terminate the spring season, the teams had already played games and competed in meets and tournaments. Senior lacrosse players Mbiti Williams and Sandy Lum said that despite the circumstances, seeing progress as a team was rewarding. “My favorite part was seeing our improvement as the season went on, and just being close with everyone on the team,” said Williams.

This year, the girls lacrosse team added new head coach Kelsey Ayers. “The best part of the season so far would probably be just getting to spend time with all my teammates,” said Lum. “We also got a new head coach this year who we all love and it’s really brought the team closer together.”

To some seniors, competing was the best part. “Just playing our first few matches were memorable for me,” said senior tennis player Rekha Sashti. “I’m really glad I got to experience some final match moments with the team as a senior.”

Senior soccer player Jesus Tadeo and the rest of the varsity boys soccer team had a strong start to their season with huge region and non-region wins. “The best part of the season was only losing two games and beating one of our region rivals Lovett, which would have given us the opportunity to compete for the region title,” said Tadeo. “I would say that our huge win against 5A defending state champions McIntosh High School was also a high point.”

As senior varsity athletes, many students have spent at least four years participating in their specific sport, whether it be on JV or varsity, allowing them to build strong bonds with their teammates and create memories as a team.

Many athletes tended to look back to memorable wins during their career. “My favorite memory with Pace lacrosse would be playing against St. Pius this year,” said Lum.  “We had no subs and still ended up winning – I felt that it was our best game yet.”

Sashti reflected on a win against Lovett. “My favorite memory is definitely winning the state championship last year,” she said. “It’s something my teammates and I worked super hard for during the years we were at Pace, so I’m really glad I got to experience it before I left.”

Neville touched on a different side of a state championship, as the varsity baseball team ended last season as state runner up. “My favorite memory from Pace baseball was definitely the state playoff run last season,” said Neville. “Even though we came up just short, it will be an experience I will never forget.”

Sample remembered a specific routine that her teammates made memorable. “My favorite memory was when my floor music was to ‘YMCA’ and all of my teammates stood up in front of me during the competition and did the arms along with me,” said Sample. “I felt so supported and loved.”

Tadeo shared that in addition to big wins on the soccer field, all the time off the field with his teammates made for special moments that he will remember forever.

“Whether it was during team meals, bus rides, film or during our resting hours, those moments were my favorite because it allowed us to bond and come closer as a team and just have fun with each other,” said Tadeo. “Those were the moments where we became more and more like a family.”

The seniors may be finishing their time at Pace, but the memories from their respective sports will be carried with them as they graduate and pass down advice to underclassmen.

“I am going to miss a lot about Pace track, but I look forward to continuing my running career in college,” said Payne. “I will miss the close friendships I made through track the most.” Payne advises her younger teammates to not take those friendships for granted.

Lettes was in strong agreement with Payne. “I am going to miss the people the most,” she said. “I have absolutely loved the team every year, and I would encourage everyone to get close with teammates in their grade, but also to people in every other grade, and just enjoy every second.”

Jatar spoke about the environment created by his teammates. “I will miss the competitive spirit on the team,” he said. “I would advise my younger teammates to just enjoy the game and work hard.”

Williams agreed, reflecting on the atmosphere of Pace lacrosse. “I will miss the bus rides, the lineups before games and the tough practices,” he said.