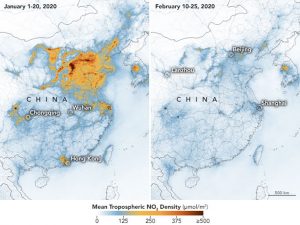 Air pollution levels in eastern China decreased significantly from January 1-20 (left) to February 10-25 (right) due to a decrease in human activity. Photo: NASA

With COVID-19 raging across the world, bringing mortality and economic decline, it is easy to get caught up in the negativity dominating the news. While it is hard to look past the devastating headlines, there is actually plenty of good in the world right now.

In northeastern cities in the U.S., pollution levels have decreased by about 30% as a result of lowered carbon emissions and human activity. Italy and China, the first countries to be severely struck by the virus, also saw significant drops (~30-40%) in air pollution within strictly locked down cities such as Milan and Wuhan. For the first time in over 30 years, the Himalayan mountain tops are visible in parts of India, also due to a decrease in pollution.

According to Stanford University professor Marshall Burke, reductions in air pollution in China have likely saved about 20 times as many lives as were lost due to COVID-19 infections.

On April 13, Virginia Governor Ralph Northam signed the Virginia Clean Economy Act, making Virginia the first Southern state to target 100% renewable energy by 2050. Senior Virginia Hobbs was an ICGL Scholar last year when energy was the topic of study. “It is great to see a Southern state moving forward, and hopefully other states will follow,” she said.

Several endangered animals are making an unexpected comeback. Earlier this year, scientists spotted 36 blue whales in the span of three weeks as compared to just one in 2018. Endangered Colorado grey wolves are set to be reintroduced into the wilderness in November 2020 after being eradicated from the wild in 1940.

In England, the white-tailed eagle, one of the largest birds on the planet, was spotted flying over a national park for the first time in 240 years.

With everyone at home indefinitely, many families have decided to adopt or foster shelter animals. The American Society for the Prevention of Cruelty to Animals (ASPCA) saw a 70% increase in pets taken in by foster families or adopted in New York City and Los Angeles.

The Crawford family, including senior Ben and sophomore Catherine, adopted an eight-week-old black lab named Hank. “This is the best time to get a dog because we are all at home to bond with and help take care of him,” said Ben. The Atlanta Humane Society has placed 217 animals in foster care since March 11 and found permanent homes for 115 in a matter of just four days.

Scientists have recently made many life-changing discoveries and developed technologies that have the potential to save lives. A French company, Carbios, discovered an enzyme in composted leaves, polyethylene terephthalate, that is capable of breaking down plastic water bottles in just over 10 hours. They are already working with major companies like Pepsi and L’Oréal to begin market scale production. Researchers have also developed a blood test that can detect over 50 types of pre-symptomatic cancers with more accurate results than current breast cancer scans.

In relation to COVID-19, James Dyson, founder of Dyson, Ltd. and mastermind behind cyclone vacuum technology, created a brand new ventilator in just 10 days at the request of British Prime Minister Boris Johnson. He is donating 5000 of these easy-to-manufacture ventilators to international hospitals and has already donated 10,000 to the British government.

Since the outbreak of the virus, over 1.26 million diagnosed patients have recovered with the support of their doctors and nurses. Among these survivors are 106-year-old Connie Titchen and 104-year-old World War veteran Bill Lapschies. In addition, hospitalization rates are slowly going down in New York according to Governor Andrew Cuomo.

COVID-19 has brought the world together as people across the globe pitch in to help their communities, no matter how big or small the action. Crossing national lines, Russia sent its largest cargo plane full of medical supplies to the U.S. “In the current situation…there is no alternative to working together,” said Russian Press Secretary Dmitry Peskov.

On a smaller scale, people are using their talents and resources to help others. Canadian high schoolers launched the JOY4ALL project, a hotline at 1-877-JOY-4ALL that provides jokes, stories and positive messages for seniors and anyone who is feeling lonely in social isolation.