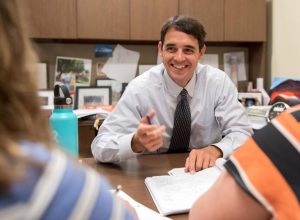 At the end of this academic year, the Pace Upper School has not only lost the Class of 2020 as they head to college, but also another presence that has made an enormous impact on the community. Math department chairperson Gus Whyte leaves Pace at the end of this school year to start a new chapter at Metairie Park Country Day School in New Orleans.

After 11 years of teaching at Pace, Mr. Whyte has decided to take his career in education even further by becoming their upper school principal. He will begin his tenure at Country Day starting July 1, where he is prepared to learn to take on a new role and lead the students and faculty.

Mr. Whyte began his career in education after receiving a B.A. from Williams College, where he also competed on the wrestling team. He then taught at a public high school for a short time. Unsure of where his future might take him next, he took a teaching job at The Salisbury School in Salisbury, Connecticut, where he later became the Assistant Dean of Students.

“Part of the reason I began teaching was because I wanted to stay involved with wrestling and be able to coach,” said Mr. Whyte. “But once I got to Salisbury, I just ended up loving teaching. There were times when I thought to myself maybe I should try something new, but then I just kept coming back to the idea of teaching. Salisbury is where everything kind of started.”

After years of teaching and coaching at Salisbury, which was an all-boys boarding school in a rural area of New England, Mr. Whyte decided to move to Atlanta, where he found a job at Pace Academy as a math teacher. Although he currently serves as the mathematics department chair, he also took on roles over time including Dean of Students and Associate Athletic Director. He has coached wrestling, cross country, baseball and girls soccer as well.

According to Mr. Whyte, although he is grateful for his time in Salisbury, Pace is where his passion for education came to life. “Salisbury was great but it was not as academic as at Pace,” said Mr. Whyte. “There was a different emphasis there, and that is OK. At Salisbury, sports were very important, while academics were not as strong. When I got to Pace, I needed to step it up academically, which helped me to learn a lot.”

Mr. Whyte says that he owes gratitude to the faculty and students as they have been an instrumental part of his journey. “The Pace faculty is truly incredible because they have great knowledge in subject matter, but more importantly know how to convey the messages of the information they are teaching,” said Mr. Whyte. “I was able to learn lots from that. Also, the students at Pace really want to do well and they love to learn, and that has helped me as well. I appreciate that I have been able to develop really good relationships and have received great feedback on how to become a better teacher.”

His students appreciate that he teaches his students with the desire for them to truly learn and absorb the concepts, rather than just memorize facts for a test. “In seeing Mr. Whyte two times per day in my BC Calculus class and Economics class this year, he has finally helped me to understand the difference between simply memorizing and truly learning, a distinction which led to my highest level of academic accomplishment as well as heightened intellectual curiosity,” said senior Quill Healey.

In taking on various roles during his time at Pace, Mr. Whyte became especially fond of the administrative positions, which is why he is leaving to become the head of an upper school.

“I have had experience at the administrative level and have been part of the conversation of how the school is run, but now I really want to do that myself,” said Mr. Whyte. “After doing it for awhile, you get a lot of good ideas and realize that you want to do it yourself. I started to think that I could only do so much in the classroom. Then I realized, maybe, if I can help guide an entire faculty, I can make the student experience better for an entire group. That is ultimately my goal. I want to create a school where I can motivate the faculty and student body to be as good as they can be.”

For that reason, a few years ago, Mr. Whyte decided to go back to school and get a Masters in independent school leadership at Vanderbilt University.

He then cast a wide net to schools all over, and eventually found the one that felt right. “Certainly one of the things I am excited about is that it feels like a smaller version of Pace,” said Mr. Whyte. “Country Day prides itself on community, student-teacher relationships and family. They are a strong academic school, which is great, too.”

When Mr. Whyte was not teaching or coaching at Pace, he continued to interact with students and other faculty by leading ICGL trips to places around the world, like Patagonia, Tanzania, Thailand and South Africa. “All of the ICGL trips have been incredible in a different way,” said Mr. Whyte. “But when I think back on a trips, for example, I know that we climbed Kilimanjaro, but I can mostly remember the times in the tent with the group just talking, and that is what I want to take as a memory.”

As many students would agree, Mr. Whyte is someone to be looked up to for his optimism, school spirit and pride in all things education. “Although I never had him as a teacher, he is someone I feel like I can truly trust and look up to,” said junior Kristin Hartman, who just travelled to South Africa and Lesotho on a Habitat for Humanity trip led by Mr. Whyte and other faculty.

Other students have specific memories regarding the impact that Mr. Whyte has made on their lives. “When I transferred to Pace after 10th grade, I didn’t know anyone and was pretty anxious about coming to a new school,” said junior Michael Fu. “But over the summer, I specifically remember Mr. Whyte mailing me a postcard from the Great Basin National Park welcoming me to Pace.”

In regards to his memories, Mr. Whyte says that what he will miss most are the relationships he has made in his 11 years. “When I look back at my time at Pace, the relationships that I have formed with colleagues and students and the memories that we have shared are the most meaningful to me,” said Mr. Whyte.

It goes without say that the Pace community will greatly miss Mr. Whyte. “On the one hand, I’m so happy for him and he is so deserving of the opportunity,” said Head of Upper School Michael Gannon. “On the other, it’s a huge loss for Pace Academy. It’s rare to find outstanding teachers who can also coach at the highest level. It’s even more rare to find people with those skills who are so selfless in sharing their gifts with the school community.  Gus attended more Pace events than anyone ever should. Not because he had to, but because he loved our students and wanted to show his support. We will miss him.”

“From Dean of Students to Head of the Math Department to occasional PAPUBA-er, Gus has touched every aspect of Pace life,” said math teacher Jason Smith. “Eternally positive, always willing to talk, always available, and, frankly, always at Pace, Gus lives and breathes Pace Academy. Is he actually Sir Winsalot, too? It’s insanely hard for me to imagine Pace without him. He’ll be deeply missed.”

“Pace has truly been a wonderful chapter in my life, but I know it is time to move on,” said Mr. Whyte. “I am an optimist by nature so it is not in my bones to be nervous or scared, but rather I am just excited. I am looking forward to a new town, a new school, new people and a chance to start things new.”