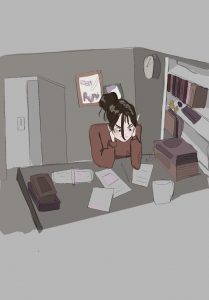 Many parents dream of having a gifted child. They play classical music for them in the womb, hire services like Kumon and Khan Academy for them, and jump at the opportunity for gifted classes. Though these students are undoubtedly being put in a good position to succeed academically, how does this focus on schooling affect them as they age?

According to The Outline, a slew of “gifted kid burnout” memes have slammed the internet in the past few years, giving us all a glimpse into the futures of these children. Many teenagers report feeling less accomplished than they did in their youth and blame this phenomenon on the adults around them who value academic prowess too heavily.

The burned-out gifted kid is someone who has been paralyzed by their own potential, says The Outline. As a child, they found encouragement and awe from the adults around them. They were told that they could be anything they wanted and that they could go anywhere they wanted, because they were just that smart. They found information easy to grasp and aced tests and quizzes.

Whatever that moment was, it was such a shock to their system that they had to reset their entire outlook. The aftermath of that reset is gifted kid burnout.

Perfectionism also has a hand in burnout. “I think that more than gifted kid burnout, we see perfectionist burnout,” said upper school counselor Amelia Tuttle. “Everything cannot always be perfect. We all experience burnout, but when we spend all our energy doing the impossible (i.e. making everything perfect), we burn out much faster. Having a growth mindset helps us become excited in the face of challenge and learn in the face of failure. Along with regular self care, this can help us not feel burned out as often.”

Burnout is characterized by losing interest in academics, hopelessness and a feeling of lost potential. It can occur anywhere from middle school to adulthood. Many students report an inability to study, due to the fact that they never needed to before. Others emphasize the averageness they feel when surrounded by other bright and talented people.

This feeling may be compounded by the disappointment of adults around them, further ridding them of the motivation needed to reclaim their former gifted status. This burnout plagues students at rigorous schools like Pace, where they are confronted with increasingly harder work as their years progress.

Teenagers who might not have to deal with this problem at a less challenging school are forced to undergo it at Pace, and because of the difficult work, it’s made much more intense.

How does one recover from gifted kid burnout? There’s no set prescription. It is often accompanied by mental health concerns such as depression and anxiety, which can require professional help. Many students end up having to come to terms with the fact that they won’t see success without trying as they did when they were younger.

But once this conclusion has been reached, it’s not difficult to gain motivation to achieve your goals. The problem of learning to study is harder to fix, but not impossible, especially with the resources at Pace such as the Academic Resource Center. Though Pace students may be more susceptible to gifted kid burnout, they also have a strong support system to help them beat it.

Categories
Life At The AcademyLifestyleSlideshow