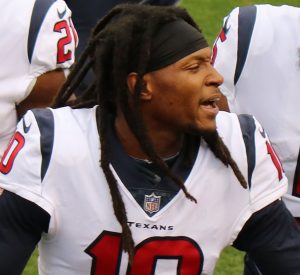 Since all major sports have been cancelled due to COVID-19, the sports world is bland. However, America’s favorite sport has done all that they can to work around the virus. The National Football League’s (NFL) free agency and trading period (commonly referred to as the free agency period) has gone as expected.

The free agency period started on Mar. 16 and technically goes into the regular season, but teams are now past the most intense part of the period. Although most big-name players have been signed, there are still some teams scrambling to fill missing spots.

The Cardinals completed a trade that would send their subpar running back, David Johnson, and a couple of invaluable draft picks to the Houston Texans, while Houston sent the best receiver in professional football, Deandre Hopkins, and a draft pick similar to what they acquired.

Obviously, this is a huge win for the Cardinals along with their signing of Jordan Phillips, a young, defensive tackle with lots of potential, and De’vondre Campbell, a versatile linebacker.

The Tampa Bay Buccaneers are winners in free agency too. Without losing too much aside from Breshard Perriman and Carl Nassib, the Buccaneers acquired the best quarterback of all time and signed some key pieces.

That’s right, Tom Brady is heading to Tampa which is a huge change from former QB Jameis Winston. To complement Brady, tight end Rob Gronkowski is coming out of retirement and signing with Tampa Bay. The Bucs also re-signed key defensive pieces Shaquil Barrett, Jason Pierre-Paul and Ndamukong Suh who are all above-average players.

The Cleveland Browns also added some big game changers to their offense and signed some defensive strength as well. Most notably, especially in Atlanta, the Browns gained Austin Hooper, former Atlanta Falcon and one of the best tight ends in football.

On the defensive side of the ball, they secured Andrew Billings and Adrian Clayborn for their defensive line. The Browns also acquired Andrew Sendejo, Kevin Johnson and Karl Joseph, which will help the Browns’ secondary greatly.

Although there were other winners in free agency such as the Raiders, Chargers, Vikings and 49ers, the losers are just as important. Apart from the Texans, the Miami Dolphins performed poorly in free agency. The Dolphins had a ton of cap space and spent the money as well. The only problem is that the team overspent on too many players.

Miami signed Byron Jones, a middle-to-top tier cornerback, to an absurd contract which makes him the highest-paid cornerback in the NFL. They also signed Kyle Van Noy, a linebacker from the Patriots, with another huge contract which was premature considering that Van Noy is aging at age 29.

The Dolphins also signed running back Jordan Howard, offensive lineman Ereck Flowers and defensive end Shaq Lawson to expensive contracts that will negatively affect the team in the future.

After the 2020 free agency, the Belichek-Brady era of football is now over. Since 2001, the combo has appeared in nine Super Bowls and has won six of them, which has made Tom Brady and Patriots head coach Bill Belichek one of the greatest quarterback coaching combos of all time.

While Brady is excited to get working with the Buccaneers, the three starting linebackers for the Patriots have also signed elsewhere. The Patriots’ defense was nothing less than superb last season and losing three players that were at its core is a huge loss.

The Chicago Bears were possibly the worst loser of the 2020 free agency. First, the Bears made some watershed signings, but at a high cost. They signed Robert Quinn, Danny Trevathan and Nick Kiatkoski to benefit the defense, which were not bad signings.

However, the team overpaid for Robert Quinn who is aging and also not a scheme fit in Chicago. Paying Trevathan more than Kiatkoski was also an interesting choice by the Bears. Those signings could be seen in a good light but some cannot.

The Bears signed Jimmy Graham who is a washed up, no good tight end. Graham’s contract came at a ridiculously hefty price as well. Lastly, the Bears acquired quarterback Nick Foles from a trade with the Jacksonville Jaguars.

Although Foles has won a Super Bowl, he is not a good quarterback; in fact, Gardener Minshew (rookie) started over him after he came back from injury. The contract Foles received from the Jaguars last season was an insane overpayment and now the Bears must take on that extremely ludicrous contract. The Bears cap space situation for the next couple of years is not one that a general manager would be excited about.

Other teams such as the Bills, Giants, Falcons and Seahawks have had mediocre offseasons. All of these teams added some players but also lost others. Keep in mind that this article did not take into account the draft at all. In some cases, a draft pick that is a solid player for years to come is better than most free agency signings.