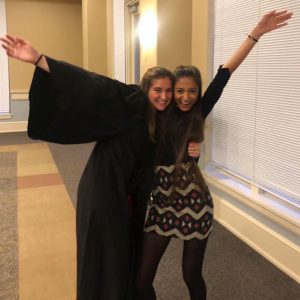 (L-R) Senior Francesca Vaneri served as a judge on the International Court of Justice in a simulation model in 2019 at GHP, while senior India Behl acted as a lawyer from Venezuela. Photo: India Behl

Every year, students nominated for the Georgia Governor’s Honors Program (GHP) undergo a rigorous application process in order to be accepted into one of the most prestigious summer programs in the state.

According to the Governor’s Office of Student Achievement, “the program offers instruction that is significantly different from the typical high school classroom and that is designed to provide students with academic, cultural and social enrichment necessary to become the next generation of global critical thinkers, innovators and leaders.”

Teachers initially nominate students for GHP for a specific subject, which becomes their major. The application process differs according to the major the student is applying for. Rosing was accepted into the Communicative Arts major, “which is essentially just a deep study of English literature,” he said.

After completing a formal application and a few other assignments, selected applicants had to attend an interview at Berry College in Rome, Georgia on Feb. 29. “On the interview day, I was given 30 minutes to read and annotate a selected story and was then thrown into a 50-minute Harkness discussion of the text with 15 other Communicative Arts applicants,” said Rosing.

Battista and Ryan were both nominated for World Languages, Battista majoring in French and Ryan in Latin. “From the time I found out I got an interview until the interview itself, I only listened to French music to help me prepare in a non-stressful way,” Battista said. “Applying was definitely stressful, but it made me like French even more.”

Ryan had a similar experience. “We had to write in Latin, which we rarely do, so that was stressful, but I also really enjoyed it since it tested my skills in new ways,” he said. “We also had to write about the accomplishments of the Roman Empire, which was really fun because I got to research Roman engineering and city planning.”

Behl was accepted as a mathematics major. “The application process involved a couple of interviews and essays, more rigorous than anything else I’ve ever applied for,” he said.

Behl has heard great things about GHP from his sister, senior India Behl, who attended last summer while majoring in social studies. “My sister has told me stories of lighting fireworks on July 4th with her new friends, going to concerts to hear GHP kids perform their music and getting to learn without having the stress of tests.”

All four students joined several GHP GroupMes. “There are around 30 different GroupMes at this point (with different qualifications for each), so it’s definitely interesting to wake up in the morning to 2,000 unread messages,” said Battista. “We’ve had some late night Zoom calls, lots of surveys and Google forms to get to know each other, we’ve played a lot of online games and I’ve texted with some of the girls.”

Students were saddened to learn on April 27 that the program had been cancelled due to the COVID-19 pandemic. “I understand why they had to cancel the program, but I’m also disappointed that they didn’t try to hold some sort of online alternative,” said Ryan.

“Given these circumstances, we regretfully must inform everyone that GHP will be cancelled this summer for the first time since its inception in 1964,” wrote Governor’s Honors Program Manager Richard Parmer in an email to the finalists. “Please know that we are already working on ways to properly honor our rising senior finalists and to provide an opportunity for rising junior finalists to be admitted to the program for next summer.”