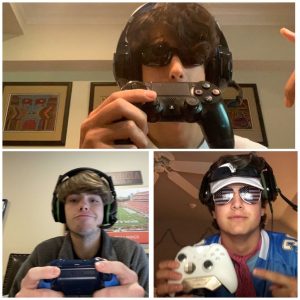 With professional and collegiate athletics canceled for the foreseeable future, sports fanatics have been left with little for entertainment. And with GHSA cancelling all high school sports for the rest of the school year, there is only one sport left to entertain the Pace community: esports.

Unlike sports that involve large gatherings and physical contact like basketball and football, professional video gaming leagues are not as affected by the social distancing mandates in place due to the COVID-19 pandemic. Leagues in specific games such as “Rainbow Six Siege,” “Overwatch” and “League of Legends” have teams playing from their homes.

Usually, the teams get together to play their matches, but with the stay at home orders, they are not able to. However, by playing from home, these players and their passions are not destroyed.

Many within the Pace student body enjoy watching these professional players and their skills. “The skill and precision the players use to tactfully defeat their opponents provides for interesting gameplay,” said junior Will Brennan, a member of Pace Rainbow Six Select 17U (the junior boys’ “Rainbow Six Siege” squad). “Overall, I love the pro league.”

Additionally, students and teachers have been competing in tournaments of their own in order to crown the master gamer. Charlie Bryant, coach of the Pace esports team, has been coordinating many of them. In late March, around 40 different duo partnerships entered into a “Fortnite” tournament. By the end of the day, sophomores Henry Leusink and Greyson O’Berry were crowned as champions for the tournament.

On May 1, 94 upper and middle school students competed against each other in three rounds of “Fortnite” duos, according to Mr. Bryant. “Tenth grader Xavier Agostino contacted a “Fortnite” representative from its creator company, Epic Games, to get the ability to create custom lobbies for private matches – a game feature not available to the general public,” said Mr. Bryant.

Mr. Bryant and some students also created a “Rocket League” tournament which generated some interest. In the end, Mr. Bryant himself won the tournament.

Similarly, some eager Madden players turned to the sticks with the hope of the Madden crown. The tournament was coordinated by chemistry teacher Matthew Smentek, and sophomore Greyson O’Berry finished as the winner.

“Even though I got rocked, Smentek is the G.O.A.T. for creating this tournament,” said sophomore Matthew Aronson. “It was something for the boys to have fun with over the quarantine break.”

Students and teacher coordinators are looking to play “Rainbow Six Siege” and “Minecraft Hunger Games” in the future.