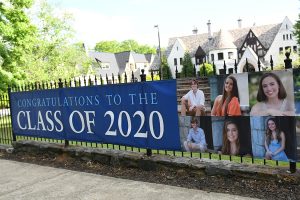 A banner hangs in front of the school with photos of all 114 members of the Pace Academy Class of 2020. Photo: Fred Assaf

After making their mark on Pace Academy for 13 years, the Class of 2020 is now graduating and traveling across the country to dozens of colleges, ready to take on the next stage in their lives. This class will go down in Pace history not only for their academic, athletic and artistic accomplishments, but also for being the first class to not finish their senior year on the Pace campus.

But despite this unexpected ending, the Class of 2020 will ultimately be remembered for their sizable contributions to Pace, as well as for the relationships they created with teachers and fellow students.

Twelve seniors have committed to play sports at their colleges. These athletes include Erin Hood, who will be swimming at Georgetown University, and twins George and Sam Adams, who will be running track and field at the University of Pennsylvania and UGA, respectively.

Two seniors – Mae Shippen and Mbiti Williams – will be attending the United States Naval Academy and have committed to serving in the Navy after their graduation.

“When I visited, I really saw how much opportunity there is for service upon graduation which was really appealing to me,” said Shippen. “I’m looking forward to the traveling opportunities and networking within the military community as well as the STEM courses. I will definitely miss the teachers at Pace and how much they truly care about your education and well being.”

This year, the boys basketball team won the state championship, and senior Reign Watkins was a team member for this year’s title and the 2017 state championship win as well. Whether in the pool, on the cross country trails or on the lacrosse field, seniors have racked up places on the state podium and broken records across almost every sport.

The Class of 2020’s accomplishments in the arts have been equally impressive, both on the FAC stage and in the art rooms. Whether it is senior Lauren O’Sullivan’s impressive costumes, Matthew Quintana’s and Madison Edwards’ acting, or Jackson Gray’s work in the sound booth, the senior class has worked on the stage and behind the scenes to create some unforgettable works. Those involved in this year’s One-Act play won the the GHSA state championship for “She Kills Monsters.”

One particular stand-out student has been senior Nikki Rubin, who is an arts laureate and has wowed Pace Academy with her musical talents countless times over her high school career. “The arts communities at Pace give so many opportunities to make connections with people that you otherwise may not have, and I really love all of those friends like family,” said Rubin.

The Class of 2020 also boasts no less than 40 “lifers.”  These students have grown from kindergartners to adults alongside each other and gained new friends and classmates along the way. “Thirteen years have flown by,” said lifer Morgan Payne. “I still remember playing blocks in Mrs. Baker’s pre-first class and all the holiday programs. I couldn’t have asked for a better group of people to be surrounded by.”

“Now more than ever the value of education is clear,” said senior dean Grady Stevens. “It is, perhaps, one of those rare possessions that once acquired can never be taken away: neither in a market crash nor while quarantined and isolated from society. This is its most powerful feature – you carry it with you always and everywhere.”

Although their time at Pace was cut short by COVID-19, the seniors look back fondly. “It’s been a great ride and I’ll miss my teachers and friends,” said Payne. “But no matter what the future brings, I know that Pace will always be my second home.”