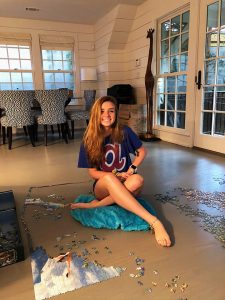 Senior Jordan Upchurch is currently working on an 18,000 piece Ravensburger puzzle of an African safari with her family. Earlier in the quarantine, the Upchurch family swapped floral puzzles with the Caton family due to the recent puzzle shortage.

With the shift to sheltering at home and virtual school due to the COVID-19 pandemic, many Pace students find themselves with quite a bit of extra time on their hands. Students gain one extra hour of sleep each night as Zoom classes do not begin until 9 a.m. and gain even more time as a result of not having to commute to and from Pace each day. As all athletics and arts extra curriculars have been paused as well, this also frees up time.

But how are Pace students truly escaping boredom? And what are they doing to keep themselves sane?

As far as keeping occupied, senior India Behl’s approach towards escaping boredom is unparalleled. “You know that sciency rule where an object at motion stays in motion?” Behl asked rhetorically. “Well, I’ve always been the object in motion. I hate having extra time on my hands. So far this quarantine, I’ve gone on a lot of walks, reread some of the “Harry Potter“ books, watched the show ‘Private Practice’ and tested out some brownie recipes.”

Cooking seems to be a trend right now, as junior Sloan Baker has been spending a lot of time in the kitchen, too. “I’ve been working out a lot and have started cooking with my family,” said Baker. “I’m testing out some healthy dessert recipes that use only vegan ingredients. I find most recipes from the cooking blog ElaVegan.”

To combat the snacking and baking temptations that free time may encourage, a lot of students, including senior Payton Payne, have been exercising. “I’ve been running a lot,” said Payne. “Running is a great cleanse after a tough virtual school day, and the weather has been so nice. Today I ran to a river near my house.” Juniors Sean Glennon and Marc Rosenthal have also been spending a lot of time outside running.

Running can’t consume ALL the free time, though, so Glennon, like most other students, has been exploring the expansive television archives that Netflix has to offer. “I stumbled upon ‘Tiger King’ on Netflix,” said Glennon. “It’s crazy!” said junior Josh Mininberg who is also watching this new documentary on big cat breeding. “Riveting and bizarre” is the only way Mininberg could summarize it. Other quarantine favorites seem to be “Gossip Girl” and “New Girl.” “‘Brooklyn Nine-Nine’ has proven to be a good binge,” said freshman Jack Wagreich.

If television shows don’t sound appealing, YouTube is another great platform for visual media streaming. Junior Jordy Elster has been watching a lot of golf trick shot videos and trying to perfect them in his own house. Elster has even involved fellow junior Matt Genser in this challenge, as the pair has been comparing their athletic accomplishments across various social media platforms. “My favorite YouTuber is probably MMG,” said Elster.

Another trend happens to be puzzles. Sophomore Cole Kaplan has been completing normal 500-piece jigsaw puzzles in his free time, but more advanced puzzlers like junior Lily Kahn and senior Jordan Upchurch have been working on puzzles with more than one thousand pieces. “Currently I’m working on a big puzzle of the United States,” said Kahn. “I was really inspired by Jordan [Upchurch]. She got me hooked on them. She dedicates like an hour every night to puzzling.”

Beyond cooking, exercise, streaming, and puzzling, a few other students have been exploring other avenues. For juniors Will Brennan and Charlie Janko, it’s music. “I found an old ukulele in my attic, and I’ve been teaching myself how to play,” said Janko. While Janko attempts to master Darius Rucker’s “Wagon Wheel” on his instrument, Brennan will be teaching himself Oasis’ “Wonderwall” on the acoustic guitar.

Several students have also spent their newfound free time cleaning. Junior Eve Kogon has cleaned her entire bedroom and plans to begin on her closet in the days to come.

Additionally, some students have begun to explore their artistic side. Junior Caroline McCullough has picked up painting. “I’m currently working on a large paint by the numbers project of Vincent van Gogh’s ‘Starry Night,’” she said.

After trying out a number of new diversions, some students still have time left over. Sophomore Grace Heineman was looking for other things to do when it suddenly hit her. “When I was super bored one day, I decided to just dye my hair hot pink,” said Heineman. “I won’t be seeing anybody anyways.”

Top Photo: Senior Jordan Upchurch poses with a completed puzzle, one of her go-to activities during this time of social distancing.