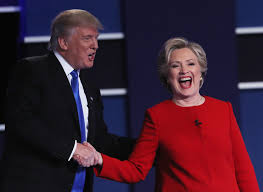 On March 30, Democrats and Republicans alike went silent as Donald Trump announced at his rally in Birmingham, Alabama that he would be dropping Mike Pence as a running mate and endorsing Hillary Clinton. “Pence Smence,” he announced. “I’m all about unifying the parties. I just learned about George Washington, and I’m only following his advice. He was the founder of our country, after all. It’s gonna be huge.”

After a few seconds of stunned silence, the crowd erupted into chaos. However, they were quieted as Clinton herself rose up from underneath the stage as the national anthem played in the background and fireworks exploded behind her.

At an address on March 31, Trump explained that he wanted to “unify the parties” in an effort to not have a two-party system, and he needed to demonstrate to the people that even he could achieve some form of unification between Republicans and Democrats. Clinton explained that Trump had picked up Baron Trump’s APUSH “America’s History” by Henretta for the first time, and learned what the founders of the United States wanted.

So what does this mean for the state of the upcoming election? Trump supporters have supported President Trump through every racist and sexist comment, every scandal and tweet. However it seems teaming up with “the enemy” has become the last straw, and Trump is rapidly losing support.

Even with this, being a running mate isn’t as glamorous as one might think. Mike Pence, through tears, reported to CNN that Clinton and Trump have “regular fistfights” and that he will miss “golfing with his brother Donald.” He has reportedly been seen leaving his therapist’s office multiple times a day. In an interview with Fox News, he told the audience that he wonders if Trump does get elected, if he could possibly serve as Vice President again.