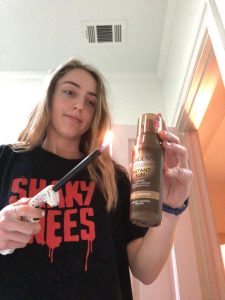 On the first day back from spring break, as students excitedly reunited with friends and filed into assembly, Head of Upper School Michael Gannon rose to make an announcement. A hush fell over the crowd until it was broken by a single scream from the back row. Two students who felt faint were carried on stretchers to the nurse’s office. Multiple students reported having heart palpitations. What could have caused such a violent reaction? The announcement that as of the following week, self-tanner would be banned from Pace Academy.

“At first, I thought it was a joke,” said senior Tanner Walton, recalling the fateful day. “But when even Mr. Gannon himself showed up the next day without his usual layer of Jergens, I realized that the change was here to stay.”

For Mr. Gannon, the moment of epiphany occurred during his usual nightly tanning session. “Like most members of the Pace student body, I was putting on my nightly layer of Jergens when I looked at myself deeply in the mirror – and I couldn’t even recognize myself anymore,” shared Mr. Gannon, a single tear rolling down his newly pale face. “That’s when I knew something had to change.”

Only a few days after this epiphany, Mr. Gannon put his plan into action. The first step was a school-wide bonfire in the back parking lot.

“That was definitely the hardest day of my high school career,” said senior Ada Jane Agolli. “I came to school with a duffel bag full of Jergens. I did keep one small bottle at home, though. Every now and then, I just look at it and feel calm.”

Students congregated in the back parking lot dressed in black head-to-toe and solemnly tossed their bottles of self-tanner into the flames. The brands ranged from Jergens to St. Tropez to Clarins, but within minutes, they were all gone.

“It’s the end of an era here,” said history teacher Emily Stevens, a known avid self-tanner user. “Honestly, my main concern is that I won’t be able to recognize my students, both male and female, without their usual artificial sun-kissed glow. It’s especially hard over Zoom – sometimes the students’ faces just look like pale blurs in the middle of the screen. There definitely will be an adjustment period.”

Some students have even remained faithful to the ban during quarantine. “I respect the Pace honor code, so of course I’ll respect Mr. Gannon’s directive even within the confines of my home,” said junior Reily Hamilton. “Is it tempting? Of course. But in the end, no temporary tan can beat the authenticity of a fresh face.”