Prom To Be Date-Free Environment 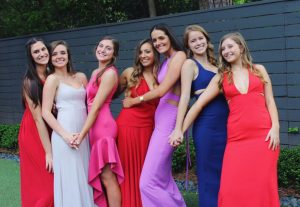 All prom guests must attend with their friends from now on, just as this current senior friend group did for their junior prom in April 2019. Photo: Jordan Upchurch

Prom is one of the most idealized staples of a high school experience. Popular movies and television shows have created a romanticized image of prom that continues to dictate what exactly a “successful prom” should include, and the list typically begins with having a great date.

In the past, Pace has enthusiastically let students ask dates to prom every year – and in some ways, encouraged it. Students have used the Pace campus as a location for elaborate and showy prom-posals, and the Castle has served as an iconic backdrop for couples photos at each prom picture party.

One Pace faculty member, however, has brought to light the troubling downside of such a pro-date emphasis. “Allowing students to bring dates ruthlessly cuts single students, like I was in high school, out of the narrative,” said Class of 2021 Dean Krista Wilhelmsen. “Not being asked by a date and then being forced to watch all the happy couples together on prom night led to deep psychological effects that still haunt me today. No student should have to endure this pain.”

Mrs. Wilhelmsen noticed this past prom (April 2019) that a few of the then-junior girls attended without dates, including current seniors Jordan Upchurch and Maya Kaplan. After asking the girls how it felt to attend prom single, Mrs. Wilhelmsen was met with an onslaught of emotion. Upchurch began crying immediately, as her pent-up feelings of heartache finally found an escape. “I’m miserable,” Upchurch admitted. “It makes me feel worthless that nobody wanted to take me.”

Mrs. Wilhelmsen used the girls’ candid confessions of shame as evidence for why Pace should prohibit students from asking prom dates in the future. “I recounted the stories of my own sad prom years ago and the stories of certain dateless attendees [like Upchurch and Kaplan] this past year to Mr. Gannon, hoping he would find value in making a change,” she said.

Mr. Gannon plans to announce over Zoom morning assembly in the near future that no students are allowed to bring a date to this year’s prom, now set for May 23 with the extension of distance learning through April 30. The event will still be held at Ponce City Market’s Rooftop.

“In an effort to reduce potential stresses and to ensure that no Pace Knight feels excluded, all students will attend prom as a community – without dates,” said Mr. Gannon. “The dance culture will be constructed the same way Homecomings at Pace have been done in the past: everybody arrives and shows up together as friends.”

While this decision is life altering for the singles of Pace’s student body, the news was devastating to many couples who had dreamt of going to prom together since their freshman year. Iconic senior couple Thomas Siegenthaler and Rachel Wray have already started a petition to try and reverse the recent change.