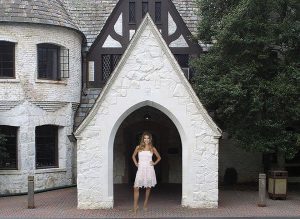 Olivia Jade poses in front of the iconic Pace Academy castle on her first day as a college counselor. Photo: Lori Loughlin

As the juniors and seniors make their way through their college application processes, Head of Upper School Michael Gannon expressed concern that three college counselors were not sufficient to meet the needs of 229 students. As a result, he consulted with Director of College Counseling Jonathan Ferrell, and together they hired America’s most desired person for the job over spring break: Olivia Jade.

Jade is an expert in the college application process, as she was admitted to the University of Southern California, finishing college with a Bachelor’s degree in social psychology and receiving a Master’s in counseling from the University of California, Los Angeles. In addition to applying this extensive knowledge to her work, she makes sure to radiate the positivity and support that came from her parents Lori Loughlin and Mossimo Giannulli throughout her life.

With amazing skills in her back pocket, Jade knows all of the tips and tricks on how to make the college process as smooth-sailing as she can for Pace students. So far, with her help, the seniors are headed to extraordinary places and the juniors will follow in their footsteps.

Pace students were thrilled with the news of Jade joining the Pace community, and they have benefitted from the advice she has been providing. Without her, students’ resumes would not be nearly as good as they are. Junior Laura Romig was filled with joy when Jade helped her add some extracurriculars to her application. “I barely made the cross country team this year and was never allowed to run in the meets because I was too slow,” explained Romig. “At the end of the season, at the state meet, they finally let me run; however, I got dead last and all I received was a participation medal because the coaches felt bad for me.”

Romig was distressed that she couldn’t go to college for running. Thankfully, Jade swooped in to save the day. Jade explained to Romig that while it was only a participation medal, Romig still received an award that she should be very proud of. Jade helped Romig compose her transcript, writing on her resume that she won first place in the state meet. Now, thanks to Jade, Romig is already committed to Harvard University and will enter as the No. 1 runner on their cross country team.

In addition to Romig, senior Aidan Gannon has had nothing but positive experiences with Jade. While Gannon has a consummate list of extracurriculars on his schedule, his grades and standardized test scores weren’t quite satisfactory in the eyes of his dream school: Yale University. Gannon failed to take rigorous courses throughout high school, with no AP classes and receiving low Bs and Cs in most classes.

In addition, after taking the ACT six different times, he has received scores of 15, 18 and 19. “Every day I look on Naviance and see the Yale scattergram with my placement surrounded by red dots,” said Gannon in tears. “I work so hard, but Yale won’t give me a chance because I don’t have a 4.0 GPA and a 36 ACT,” he said.

Jade heard the news and immediately set up a meeting with Gannon. She then proceeded to review his high school transcript with him, going through every grade he has received. After a while, Jade recommended that he try to change his grades. With the help of tech-savvy computer guy Neil DeRosa, Gannon was able to hack into the school system and alter his grades, updating all of them to As. Jade also recommended that he hire someone to take the ACT for him.

After raising money at a Pace bake sale, Gannon finally pooled together enough cash. He hired Igor Dvorskiy, an administrator of standardized tests in California, to take the ACT in his place. Gannon was pleased to learn that Dvorskiy earned a 35 on the ACT. Gannon updated his score and proceeded to submit his new and improved application to Yale. A few weeks later, Yale offered Gannon a full ride to their school, fulfilling this young student’s dream. “I truly couldn’t have done it without the help of Olivia. She really is someone special and I don’t know how other students got into college without her help” said Gannon.

The Pace Academy faculty were especially thrilled at the idea of welcoming Olivia into the Pace community. Dean of Students Allison Riley was ecstatic that someone as esteemed as Jade was coming to work with the Pace upperclassmen. “I am just thrilled that she is helping them craft honest and superb resumes so that they have the best chance possible at the college of their choice,” said Ms. Riley.

In addition, upper school math chairperson Gus Whyte loves how Jade has helped all of the Pace students. Mr. Whyte has a passion for kayaking and brings students out to the Chattahoochee River a few times during the school year. Junior Anthony Salazar decided to tag along for one of the trips and fell in love with the activity, even deciding to try out for a club crew team. After trying out and failing to make the team, Salazar was dejected that he couldn’t add this experience to his resume; however, Jade explained to Salazar that trying out was enough.

Jade advised Salazar to add that he was a member of a professional crew team to his application, and once completed, he submitted his application to the Georgia Institute of Technology. Tech was fascinated by his diverse skillset and invited him to join the class of 2025. In addition, they provided him with $100,000 to start a crew team at Tech when he arrives in the fall of 2021. “I’m so glad I served as an inspiration for this student to pursue what he truly loves and was born to do” explained Mr. Whyte. “Olivia’s help is invaluable, and I cannot wait to see the amazing things that Anthony does at Tech. He is the future of rowing.”

While all of the teachers seem to be raving about Olivia, history teacher Helen Smith has concerns about this new member of the college counseling office. “She violates dress code every day and I am sick of it. She is setting a poor example for Pace Academy girls,” said Ms. Smith in frustration. “I will be taking this up with Mr. Gannon and demand that there be stricter dress code rules implemented and enforced for adults in our community.”