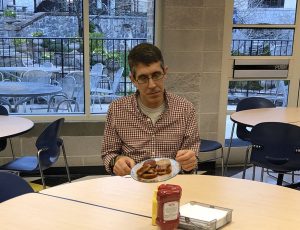 Math teacher Jason Smith is one of Pace Academy’s most brilliant minds: an intellectual man who seems to have all of the answers to students’ most difficult questions. In addition, he prides himself on being the co-founder of the Pace Academy Pick-Up Basketball Association (PAPUBA) and one of the best faculty players out there.

Students describe him as easy going, relaxed and friendly. But one thing that Mr. Smith does (actually doesn’t do) surprises the entire Pace community. He refuses to eat the Pace Academy lunch provided by SAGE dining… until now.

On March 13, Mr. Smith was spotted in the cafeteria as school let out early for the day with a plate full of one of Pace’s trademark dishes, fried chicken sandwiches. Senior Jack Jacoby, one of Mr. Smith’s AP Statistics students, was admittedly confused at the sight. What could possibly be the reason Mr. Smith decided to cave and taste the delectable combination of crispy chicken and soft bun? According to Jacoby, he thought this was his final chance to try the SAGE dining cuisine as Pace transitions to virtual learning, quite possibly for the rest of the year.

Unsettled, students wanted answers. They were excited but bewildered by this historic moment. “We always discuss what the lunch is every day in class and Mr. Smith just smiles or laughs at us,” said senior Meghan McMillin. “Today, though, he seemed intrigued by our discussion. I should have known something was up. Chicken sandwiches are a quality meal for Mr. Smith to try for the first time, and based on his reaction, I don’t think this will be the last time he is seen in the cafeteria.”

As students left for the day, they could not stop discussing the seemingly insignificant, but actually huge topic. It was only right to question the brilliant teacher and find out what was different about that day. After talking to Mr. Smith, he admits that there is nothing wrong with Pace lunch specifically, he just doesn’t have a large appetite and is not very hungry at lunchtime. “Today for some reason, though, I was starving, so I just went for it,” said Mr. Smith. “Also with Pace’s closing for two weeks and maybe the rest of the year, I knew this could be my last chance to try the food.”

After hearing the news, many of Mr. Smith’s students began to make lists of the best Pace lunches for him to try next time instead of his usual fare of stale Cliff bars. Among them include Rodeo Burgers, King Ranch Chicken, Pasta Bolognese and the classic Sloppy Joe sandwich with waffle fries.