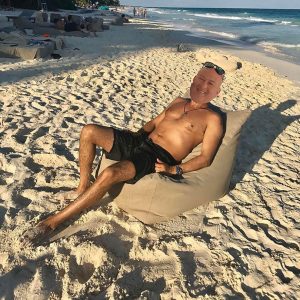 Mr. Assaf looks forward to retirement so he can sunbathe like he did on his spring break vacation to Grand Cayman. Photo: Martha Downer-Assaf

Head of School Fred Assaf has just announced that he will be retiring following the end of the 2020-2021 school year and graduation of his youngest son Tommy. After working at Pace since 2005, Mr. Assaf has decided that his 16th year will be his last as he looks forward to spending more time with his wife Martha and two dogs.

Reflecting back on his time at Pace, Mr. Assaf recalls how the people he has met at the school have completely changed his life. “People like Paula Pontes and Ben Ewing have really shown me how to pursue my passions,” said Mr. Assaf. “Mr. Ewing’s applications of biology and chemistry to cooking have shown me that you can truly apply learned knowledge to everyday life while Dra. Pontes’ commitment to Disney has made me realize that love has no boundaries.”

One of the largest influences on Mr. Assaf’s life has been Head of Upper School Michael Gannon. “Mr. Gannon has always been there for me throughout my time at Pace,” said Mr. Assaf.

“I do feel that I have been a large presence in Fred’s life,” agreed Mr. Gannon. “I’m not really sure what he is going to do without me.”

Other teachers were shocked to hear the news, including history teacher Helen Smith. “I cannot believe he is leaving Pace after just 16 years!” exclaimed Ms. Smith. “I have been teaching at this institution for almost 50 years, and I most certainly do not plan on stopping anytime soon.”

Since Mr. Assaf made his announcement fairly early, there is plenty of time to find and acclimate a new head of school. With all of her teaching and leadership experience, some people wonder if Ms. Smith should be handed the position. “I think she would make a fabulous head of school,” said junior Noah Levenson. “With her organization skills ability to calm a crowd, she is the obvious replacement.”

Another frontrunner is English teacher Hayley Conroy. Despite only being in her second year at Pace, Mrs. Conroy exemplifies what a true head of school should embody. “She is a very serious individual, and I think she would provide a great balance to some of the silly antics that occur at Pace,” said sophomore Marissa Goodman.

With many candidates to choose from, Mr. Assaf truly has at least one more difficult decision to make before he departs from Pace. However, Mr. Assaf may already have a recommendation for a replacement in mind. “There are many wonderful options, but to be extremely candid, [French teacher] David Matanes is definitely the most obvious choice,” said Mr. Assaf “He is all about making his students focus in the classroom, and he is never one to distort the truth.”

One of the largest questions that has arisen after Mr. Assaf’s announcement is whether or not he will continue to take photographs at Pace events. “Have no fear,” said Mr. Assaf, “I will still be taking pictures at as many Pace events as I can. I was even considering pursuing photography since I am going to have so much more time on my hands.”