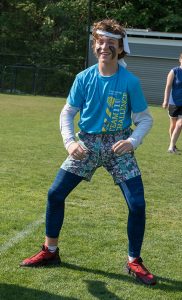 Sophomore Alex Karamanolis looks forward to reliving the fun he had in Middle School with a high school Team Challenge. Photo: Laura Inman

This year, former Head of Middle School John Anderson is coming out of retirement to host the Upper School’s first-ever Team Challenge. The event will be held on May 5, a day after Middle School Team Challenge. The activities will include crowd favorites such as kickball, volleyball, battleball, “Jeopardy!” and, of course, the beloved pie-eating contest. However, unlike the Middle School, there will also be cricket and table tennis tournaments. The team colors will include mustard yellow, ketchup red, pickle green and cheddar cheese orange.

During his time at Pace, Mr. Anderson brought recess and Team Challenge to the Middle School for the first time. He was always a firm believer that recess and other fun mental breaks were more effective when teaching students than other methods like testing. “As you all know, my favorite saying is ‘It’s a great day to learn,’” said Mr. Anderson. “But sometimes it needs to be a great day to play. High school students are so stressed out with their workload, they deserve at least a day to have fun.”

Head of Upper School Michael Gannon is among those excited about Mr. Anderson’s return to host this event. “I hope this day gives students a day to have fun and compete,” said Mr. Gannon. “If the day goes smoothly, I may explore the option of adding recess into a normal schedule.”

Other faculty members are thrilled at the opportunity to compete in the student versus teacher basketball tournament. PAPUBA star and upper school science teacher Kevin Ballard has been vigorously training for the big game. “I practice about one to two hours every night to ensure that I will be at the top of my game when May 5th comes,” said Mr. Ballard. “He’ll need to be at the top of his game to compete against us,” said junior Matthew Cleveland, who was recently named state AAA Player of the Year by Hoopseen.

Cleveland and his varsity basketball teammates have not stopped training since their state championship win on March 5 so that they will be ready to face off against the faculty. “Other than the state championship, this will be our biggest game of the year,” said AAA All-State player and junior Madison Durr. “We haven’t been able to practice as a team because of social distancing, but everyone is doing what they can to train at home.”

The basketball game is not the only activity students are looking forward to. “I am planning to use the volleyball game as practice for the upcoming 2021 volleyball season,” said sophomore Taylor Knowlton. “With Westminster no longer part of our region, I am going to need better competition to help me maintain my skills.” Freshman Ovie Nirgudkar plans on leading her team to victory in “Jeopardy!”. “I watch ‘Jeopardy’ almost every night and I have flashcards with random facts that I study,” said Nirgudkar. “I am confident there is nothing they will ask that I do not know.”

The day will begin with an assembly to showcase each teams’ hype video, and then all of the teams will congregate in the gym for volleyball and pie eating. From there, the teams will split up by grade level with the freshmen beginning with “Jeopardy!” with math teacher Jason Smith and history teacher Helen Smith, the sophomores on the field for a game of kickball with English teacher Don DuPree, the juniors on the upper field for a game of cricket with history teacher Christine Carter and the seniors in the gym for tug of war with English teacher Marsha Durlin. All grades will rotate activities until everyone has completed all of the stations.

The different grades will then rejoin their teams to cheer on their team-selected table tennis player. Next up is a cookout in the gardens and the student-faculty basketball tournament. The day will close in the FAC with a family-friendly movie. Team Challenge will take place rain or shine.