Lil Huddy to Speak at Graduation 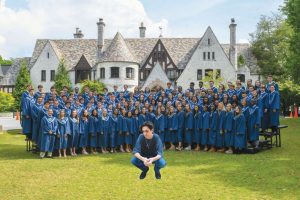 The Class of 2020 poses with Lil Huddy (center), who will be their Graduation speaker or possibly dancer in May. Photo: Mary Childs Hall

Each school year comes to a close with a very special, celebratory day for the seniors: graduation. And with each graduation ceremony, the anticipation of students, parents and faculty heightens as everyone waits to discover who the much-awaited guest speaker will be.

In the past, Pace has welcomed guests ranging from NFL quarterback Matt Ryan to Golden Globe-winning actor Robert Downey Jr., both of whom shared their words of wisdom with the graduating classes. With a simple walk through the school hallways, one might have heard numerous students placing bets on who this year’s special guest will be.

However, with the special circumstances students and teachers now face with distance learning, Head of School Fred Assaf decided that the time is right to reveal the speaker. World famous TikTok star Chase Hudson, better known as Lil Huddy, will grace the senior class with his eloquent words and shrewd advice regarding the students’ futures.

Lil Huddy is a social media influencer and will be Pace’s youngest guest speaker to date, as he is only 17 years old. Lil Huddy’s most popular platform is TikTok, a social networking app where users share short lip-sync, comedy and dance videos to the world. With over 16 million followers on TikTok, he’s considered a charming heart-throb who has fully captured the attention of Gen Zers across the globe.

Young teenagers aspire to be able to move their hips and legs the way he does when dancing to songs like “Lottery” (Renegade) or “Watch Me Throw It Back.” He also uses other social media platforms, like Instagram, where he posts inspiring photos, like a recent one captioned “ehhh cheer up sport,” in which he is running his fingers through his hair and biting his lip. Some of his other moving Instagram captions include “hashtag for you,” “cheezin cuz life is good” and “i walk into the party and rock the party.”

The speaker usually gives advice to the students on how they can move forward after leaving Pace, but because Lil Huddy is more familiar with dancing to explicit music, he will likely teach the seniors some important TikTok dances that will be far more valuable in college than guidance regarding change and becoming an adult. “There is nothing more important to me than knowing how to hit the woah or throw it back,” said senior Paul-Louis Biondi. “I know those dance moves will take me far at Princeton.”

Some may question, how did Mr. Assaf get his hands on Lil Huddy, as he is obviously an extremely busy young man? Well, while in the Bahamas for spring break, seniors Jason Rosenbloum and Matthew Quintana had the privilege of meeting Lil Huddy, along with his co-workers, Charli D’Amelio and Addison Easterling. “When I saw Lil Huddy, the first thing that came to mind was to beg him to be our graduation speaker, as anyone would do when meeting a celebrity like Chase Hudson,” said Rosenbloum.

According to Rosenbloum, Lil Huddy was uncertain about the possibility of being able to come to Atlanta for the weekend of May 16, as he is contractually obligated to post 50 TikToks per day. However, Mr. Assaf was able to contact Lil Huddy’s manager and practically beg on his knees for the young star.

Some students who have no relation to the senior class have even mentioned how they will be attending graduation just to catch a glimpse of their idol. “Oh my, Chase Hudson has been my celebrity crush ever since I saw a video of him dancing in a hot tub,” said junior Caroline McCullough. “I have already made plans to sneak through the back entrance at Peachtree Road United Methodist Church so that I can take a peek at his dreamy biceps and heart-melting eyes.”

Even teachers are getting into the spirit. Science department chairperson John Pearson was caught liking and commenting on Lil Huddy’s TikToks. “I saw Dr. Pearson comment heart eyes emojis and ‘my idol’ on one of his videos,” said freshman Belle Divine. Ms. Smith even mentioned to his freshman physics class that meeting him is on his bucket list, according to freshman Sheza Merchant.

Faculty have started urging all students to research Lil Huddy before his arrival so that everyone can give him a warm Pace welcome. There are even rumors that history department chair Tim Hornor is hoping to convince Lil Huddy to join the Pace student body for his senior year, as he would be “a joy to teach.”