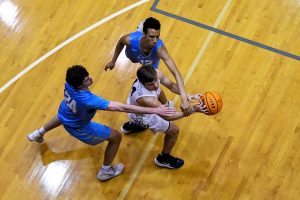 Daniel Lucke (right) takes the court against the Lovett Lions for his first and simultaneously last minutes playing for the Pace team. Photo: Fred Assaf

On Jan. 31, Lucke made his debut against rival Lovett School during an intense region matchup in the Inman Center. In a play that gained him millions of views, Lucke broke a defender’s ankles and proceeded to sink a 3-point buzzer-beater, capping off the 81-47 victory for the Knights.

Unbeknownst to Lucke, a Duke basketball scout attended this game and was impressed by his potential on the court. “A couple days after the game, I got an email from the Duke athletics office asking to set up a meeting with the head mens basketball coach, Mike Krzyzewski,” said Lucke. “I thought he was just going to congratulate me or something, but then he told me they were interested in me as a player!”

“Daniel Lucke is unlike any player we have seen before,” said Coach Krzyzewski. “His potential is untapped. Also, with the right training, he could go far.”

Lucke is excited to attend the alma mater of former Pace basketball legend Wendell Carter Jr. ‘17. He hopes to follow in his footsteps and play in the NBA. Carter supports Lucke and has offered to help him get to the veteran player’s level. “I see a lot of my younger self in him,” Carter said. “He might not have the training, but he’s got ‘it.’ He has the drive and talent to become a real star.”

Originally intending to attend Notre Dame in the fall of 2020, Lucke had a tough decision to make. “Notre Dame was my dream school – and it still kind of is – but this is an opportunity that’s once in a lifetime,” he said. “I just knew it was the right choice for me.”

All of Lucke’s family, friends and teammates are both surprised and excited for this opportunity. “I had kind of given up on my athletic dreams for my son,” said Stephanie Lucke, Daniel’s mother and a six-time All American in track and cross country and Big Ten Conference Female Athlete of the Year. “I got used to only seeing him in the stands or on the bench, so this was all really unexpected.”

Despite the sudden change of plans, his family and friends supported him through it all. “I’m just excited to see him in the big leagues,” said junior and teammate Cole Middleton. His coaches are equally proud and yet sad to see him go. “It’s bittersweet, really, to be losing such a great kid,” said varsity boys basketball head coach Sharman White.

As his time at Pace comes to a close, Lucke wants to thank everyone – his friends, family, coaches and the whole student body. “Without the support of Pace behind me, I would never have been able to achieve what I have. As I enter my next chapter at Duke, I leave behind many fond memories in the classroom and with friends, but mostly I will cherish my three minutes spent as a player on the basketball court.”