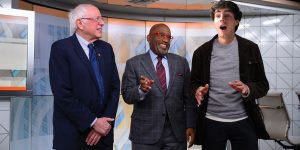 Democratic presidential nominee Bernie Sanders is the only person that can save America from the terrors of conservatism and capitalism. Capitalism has destroyed the country and the only possible solution is the democratic socialism supported by Bernie. In some minds, socialism carries a negative connotation because of its past failures in countries such as Venezuela and North Korea; however, Bernie’s socialism is “democratic.” With that said, Bernie is a man of the people, especially the upper class.

Economically, Bernie and many other like-minded Democrats are pushing the Green New Deal. The Green New Deal basically centers all economic decisions around climate change, which is the most pressing issue to America and the world today. In order to achieve zero carbon emissions, the plan hopes to create a 100% renewable energy sector and a nationwide electric transportation fleet, which means there will be no more gas-fueled cars, buses, trucks or airplanes. There is just one tiny obstacle with this idea: it is estimated to cost 50 to 90 trillion dollars over the next decade (according to various sources and think tanks). This plan is incredibly ambitious but I believe Bernie can get it done through hard work and grit.

Another big policy point for Bernie Sanders is his “Medicare for All” hopes. This wonderful plan will expand free healthcare services to all Americans through a single-payer system. Also, prescription drug prices will have caps so even the sickest patients will only have to pay at most $200 per year.

Bernie has been using the COVID-19 outbreak as an example of how badly the U.S. needs a single-payer healthcare system, and he is absolutely correct. However, Italy (one of the the worst affected countries) has a single-payer system and the number of cases is exponentially growing, which does not support his beliefs, sadly. The U.S. private health industry has already sent two COVID-19 cures to the Food and Drug Administration for approval all in the matter of a few weeks. Still, the single-payer system is necessary for the future prosperity of the medical industry and health of the American public.

Bernie’s beliefs on the immigration system are far from the policies of President Donald Trump, thank goodness. Bernie plans to institute a temporary suspension on deportations once he enters office, which will allow for a massive influx of hard-working people and illicit substances, like methamphetamine and heroin, into the U.S. He also wants to dissolve the Immigration and Customs Enforcement (ICE), a disgusting institution, and probably put the money into something worthwhile.

Lastly, Bernie’s College for All idea is flawless. Instead of promoting trade schools so that people can become electricians, plumbers or carpenters (something there is a scarcity of), Bernie and others want all public colleges and universities to be totally free. Additionally, all student loan debt will be cancelled under Bernie’s watch. All of this will cost upwards of $1.5 trillion but that is no problem because the 1% will surely pay for it. The Green New Deal, Medicare for All, College for All and all of the other much needed programs will be funded by major, wealthy corporations. Hopefully, these people and companies can combine their resources for over $100 trillion for Bernie’s tenure in office.

In the past, Bernie has notably praised communist regimes in the Soviet Union and Cuba, which is a great thing. He backed a Marxist-Leninist Party during the Iranian Revolution that took Americans as hostages as well. While Democrats and Republicans alike were united in rescuing the hostages, the brave Bernie Sanders opposed the calls for freedom. This demonstrates Bernie’s ability to break with traditional American norms. Until recently, he also supported the authoritarian government in Venezuela headed by Nicolas Maduro. Some people may view Bernie’s past endorsements as bleak, however, these endorsements show how he will not be afraid to implement extremely radical changes when he becomes president. FEEL THE BERN BABY!